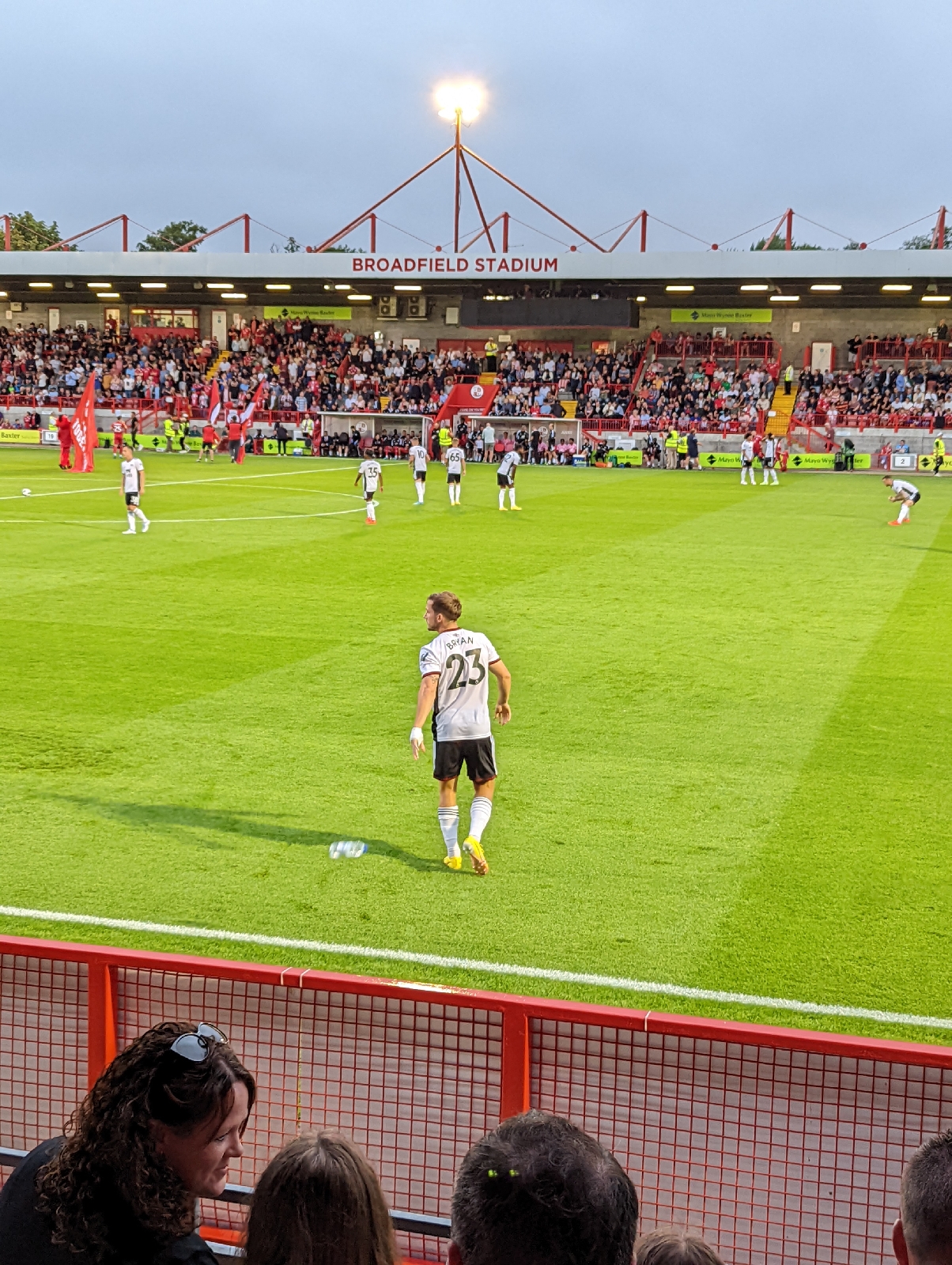 There is something magical about visiting a new ground, isn't there? A different journey to a foreign land, the unknown parking situation, what food to get; all of this adds to the allure of the trip. But the thing I love most? Watching football from an alternative perspective. It's the same reason that I periodically enjoy sitting in different locations at Emirates Stadium. Watching football from alternative areas within a ground allows you to see things that you might otherwise miss if sat elsewhere or from the comfort of the living room.

Last night, I travelled for one and a half hours across 90 miles to visit Broadfield Stadium, the home of Crawley Town, to witness their giant killing of Premier League new boys, Fulham, simply because I wanted to tick off a new ground on the trusty Futbology app. For those that are unfamiliar with the application, it allows you to document all of the games and stadiums that you have visited throughout your time following football in a way that negates the rather antiquated use of spreadsheets to achieve the same feat. Not only can you document historical trips, but simply open the app when you attend a ground and it will check you in and add the match to your growing list of accomplishments. Oh, and for certain fixtures, it will even give you a badge of approval to make you feel like an absolute boss.

I'm extremely lucky that I have two close friends who are equally as obsessed with the groundhopping phenomenon, which adds a healthy competition to the quest for new football. Healthy may be a term that is disputed by my wife, whose exact words when informed of the trip to Crawley were: "you're now going to games when you don't even support either team? You've got to stop this." Perhaps a fair enough comment, which to be honest has been the driving force behind me writing this blog. It could be construed as a desperate attempt to justify my ventures around the country on a biweekly basis, but I prefer to think of it as just another way of expressing just how good football is.

Attending games alone may sound like a drag to some. For many, the social element is what makes the day what it is, and although I love this part of the experience, there is something soothing about jumping in the car, going to a game and simply watching. Taking in the detail, dissecting the technique and the thought behind each decision a player makes, and assessing player performance, it all feels magical to the football purist. Watching the game last night allowed me to sit as a neutral and simply enjoy the game for what it was, a classic English cup tie.

When I watch games like this, I always like to try and retrieve an Arsenal angle to add an extra bit of zest to my palate. Last night, there was plenty to get my teeth stuck into. Kevin Betsy, the former Arsenal U23s head coach, is now conveniently at the helm of Crawley Town. The 44 year-old was highly thought of within the Arsenal academy and it was considered a big loss when he decided to try his luck at leading a first-team of his own. Despite the promise, Betsy has seen his side struggle in the league, picking up just one point from their opening five fixtures in League Two and sitting above only Rochdale at the base of the table. However, on Tuesday night, they looked anything but a side fighting to save their Football League status, romping home to a comprehensive and deserved 2-0 victory over their Premier League counter parts.

Fulham head coach Marco Silva did make ten changes from the side that beat Brentford at Craven Cottage on Saturday, but this should not deter from the fantastic performance that Crawley put in. From the goalkeeper right up to the forwards, they were the better side and made Fulham's fringe players look exactly that.

Elsewhere in the Crawley starting XI saw Arsenal loanee Mazeed Ogungbo start on the left side of a back three and if truth be told, he was hardly troubled by anything that Fulham threw down his side. The opportunity for the 19 year-old to pitch himself up against Premier League players will no doubt do his confidence and progression the world of good.

So there we have it, a new ground, a cup upset and an element of Arsenal; it really doesn't get much better than that for a Tuesday evening.... except when Arsenal are playing!