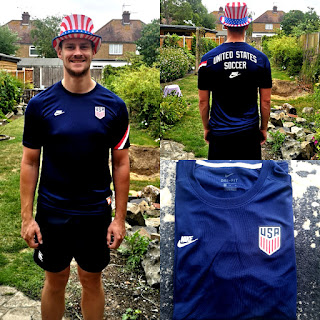 It's a slight change of pace today, as I am taking an unprecedented pause to my Arsenal shirt project to celebrate a significant part of my heritage. My Mum is American, and it is a part of me that I have always been incredibly proud of. Yes, the United States are going through a troubled time currently, but it is still a part of me that I would not change.
Once the world returns to some semblance of normality, I am planning on applying for my American passport. When I have discussed this with various people, they normally assume that this is because I want to go and live there, which isn't the case. It would be nice to have the opportunity to do so at some point, but this isn't my main motivation. I want to have some way of celebrating my heritage and feeling more in touch with my foundations, which this would go a long way to achieving.
Growing up, I was always a little disappointed that we did not celebrate American holidays as a family. The only occasion that I recall us celebrating Thanksgiving as an example, is when we visited Florida when I was five. However, in the last couple of years, I have ensured that we celebrate Thanksgiving together, and it is a tradition that will be part of my yearly planning for years to come. This year, I am adding a 4th July barbeque to the yearly holidays that we celebrate, so today will consist of drinking lots of Budweiser and eating a lot of food!
It is also a good opportunity for me to share my thoughts on international football...… I don't like it. I love football and I will watch anything that is on television, including international games, but I struggle to apply any passion into it whatsoever. I enjoy tournaments such as the World Cup and the European Championships, but this is purely because of the celebration of football that they represent. I love seeing the smaller nations performing above and beyond their limitations and the pride at which some of these players clearly feel towards representing their nation.
However, I cannot stand the England national team. I spend the entire year berating players who play for any club other than Arsenal, so it is very difficult for me to simply switch off this hate to cheer someone like Harry Kane, simply because he is representing my country of birth. During England's run to the semi-finals of the 2018 World Cup, I got very little enjoyment out of any of it. There were so many Tottenham players in the England squad that all I could think of was the reaction of their supporters had England gone all the way; Tottenham win the World Cup! West Ham fans still cling onto 1966, so this isn't a farfetched fear.
Over the years I've seen so many social media posts arguing that you are in someway wrong if you would rather your club win a trophy than your country. I would rather see Arsenal win the League Cup than England win the World Cup. In fact, I would rather see Arsenal win a North London Derby than this. I have so much emotional investment in Arsenal that it is simply impossible for me to replicate that passion and intensity with England.
I have often found myself more inclined to support the US national team in the World Cup, simply because their squad invariably does not include many players that I have spent the whole year swearing at. Football has progressed massively in the States over the last ten years, and it is a project that I would love to see significantly benefit the national team. Slowly but surely, top talents from North America are creeping into the European game, so fingers crossed in the next few years, the USA will start to consistently perform in international tournaments. I have always forced myself to support England and watch their games. It almost feels like an obligation that I have as a football fan who was born in England. Supporting the USA is far more fun, though.
Anyway, have a great day, everyone!
Happy 4th July!