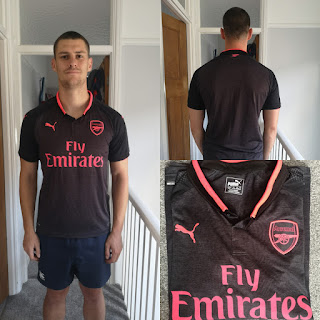 During the post Arsene Wenger years, it's fair to say that the standard of football has diminished somewhat. That is not to say that Arsenal weren't already on a steady decline in the latter years of the Frenchman's stewardship, but the football since has certainly changed.
Under Wenger, you always felt that there would be a couple of games a season where everything clicked, regardless of the overall form of the side. When looking at this shirt, I remember fondly a 5-2 win away to Everton where all of Arsenal's star players seemed to be singing from the same hymn sheet.
Over the years, Arsenal have held onto this reputation that they play beautiful football. This is a testament to the standard that became the norm in the late nineties and early noughties. But, if truth be told, this style had long since disappeared, rearing its head on far too seldom occasions. When it did click though, it was a sight to behold.
In comparison to the team that Arsenal have now, the 2018/2018 squad should have been achieving much more. A prime Mesut Ozil and Alexis Sanchez, supplemented by other talents such as Aaron Ramsey and Jack Wilshere, the team really shouldn't have been competing in Europe's secondary competition. What followed was three pieces of business that would define the next few seasons.
With both Ozil and Sanchez having contract disputes with the club, it meant the season was inevitably going to be disrupted. Eventually, Sanchez signed for Manchester United in a swap deal that saw Henrikh Mkhitaryan travel to North London. In hindsight, that deal has to go down as one of the worst in the history of English football, for both sides.
Arsenal then went onto convince Mesut Ozil to commit his future to the club, with a deal reportedly for £350k a week. Again, ridiculous business when we look back at it now. A wage bill crippled on a player who has simply not delivered since this point.
Finally, a chain of events took place which involved three strikers. Arsenal were desperate to sign Pierre-Emerick Aubameyang from Borussia Dortmund. However, the German side would not allow their talisman to leave unless they had a replacement, which transpired to be a loan move for Michy Batshuayi from Chelsea. The West London side wouldn't allow this unless they had a replacement, so Olivier Giroud made the trip across London.
Of course, Aubameyang has proved to be a massive signing for the club. He is the fastest man to score 50 Premier League goals in the history of Arsenal Football Club, a feat made all the more impressive when you consider the level of teams he has played in. However, allowing Giroud to leave felt like a mistake then, and certainly does now.
In the style that Arsenal play, Giroud would fit perfectly to allow Arsenal to have a focal point in attack. Often, the Gunners are crying out for someone to simply hold the ball up and bully defenders. Alexandre Lacazette has many qualities, but these aren't traits that I would immediately associate with him. I have said often over the last year that Giroud would still be a far better option for Arsenal in attack, and it genuinely hurts seeing him playing and scoring for Chelsea. However, if this was the only way that Arsenal could get Aubameyang, then I suppose it needed to be done. Whether this was the only way to get him is another matter entirely.
It has never sat right with me the idea of doing business with your rivals, and far too often over the last ten years, we've been willing to do just that. Hopefully, those days are a thing of the past.
This post doesn't have much structure. I kind of went off on a tangent about things that annoyed me. It was genuinely meant to be a post surrounding the potential battering that an Arsene Wenger side could dish out. I hadn't even considered this disastrous transfer window (Aubameyang being the exception!). It turns out it affected me more than I would care to admit!
Football really is the perfect analogy for my bipolar disorder. With the flick of a switch, emotions can change without any prior warning. It's great though, isn't it!?