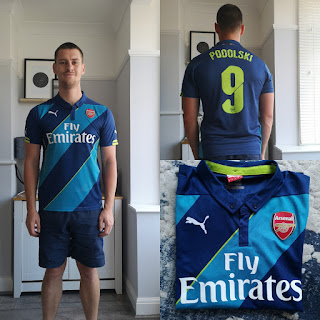 I've written some blog entries that I have felt have been really good, but have had very little interaction. I've also written some terrible pieces that have had a lot of readers. While yesterdays post about Yossi Benayoun wasn't the latter, it was by no means one of my more elaborate and interesting bodies of writing, yet quite a number of people took the time to read it! Perhaps Yossi Benayoun wasn't as unpopular a signing as I initially thought!
The only thing that comes to mind when I see the above shirt is Danny Welbeck rounding David de Gea in the FA Cup quarter final at Old Trafford, before rolling the ball into an empty net. At the time, I was working as an analyst of the Polish Extraklasa for a company called Football Radar,q and as such had to cover a game in the evening, therefore ruling me out of making the trip to Manchester. Therefore, I had to make do with watching in my tiny, studio flat in Chiswick, where the walls were paper thin and my neighbours could hear me even if I opened the fridge.
When Nacho Monreal put Arsenal 1-0 up, I screamed pretty loudly; when Wayne Rooney equalised, I swore pretty loudly; and when Welbeck restored the lead, I almost caused my lungs to explode. Needless to say, my neighbours had as good a night as me!
In the modern era of football supporting, particularly as an Arsenal fan, there tends to be two types of players. Firstly, those that perform admirably for the club, before leaving in acrimonious circumstances and instantly being relabelled as a Judas; and secondly, those that never quite live up to the lofty expectations forced upon them by fans and therefore are seen as rubbish. Of course, for rational supporters, the spectrum of success isn't quite this black and white. However, for the majority, this is a fairly sustainable model.
This is arguably a product of the decline of Arsenal Football Club. Having been spoilt in the earlier years of our lives, those that are of a similar age to me have known Arsenal as a club with illustrious players and a successful history. However, anyone who has done a semblance of research into the past will know that Arsenal have never been a club that have consistently been challenging at the top. They are a club that have had periods of success followed by spells of prolonged mediocrity. It is the lack of understanding of this past that can restrict the rational approach to assessing the success and failure of players.
Nacho Monreal and Danny Welbeck were players that fit perfectly into this middle ground. Solid players who would put in consistent performances, without setting the world alight. But having been spoilt by individuals such as Ashley Cole and Thierry Henry, it is very difficult for players to unanimously be considered a success when measured alongside this calibre of footballer. Now, if a player is not considered the best in the world, they are often not seen as good enough.
Football is a game of opinions, and everyone is entitled to theirs. But particularly in the era of social media, where everyone can have their thoughts seen by others all over the world, football has become a far more negative experience with unrealistic expectations. It has changed from these conversations taking place in the pubs and on the terraces, to a world where we are suffocated with negativity for all hours of the day.
I for one, am thankful for the unextraordinary players; the players who represent the club with pride and dignity; the players who make up 90% of the squad; the players who make up the heart and sole of my football club.