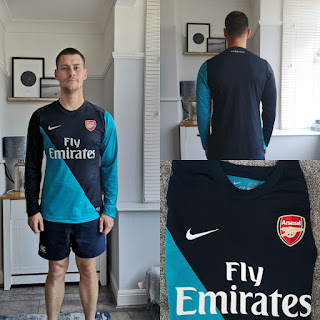 I'm still really upset about Arsenal losing the North London Derby, so it's a real struggle to make myself write about anything to do with the club this morning. It's a game we should have never lost, but yet another example of the glaringly obvious deficiencies within our squad. We are currently a mid-table side, and it really, really hurts.
Nevertheless, I've committed to this project so I will continue. This shirt is probably the most random in my collection, and in all honesty, doesn't really have a place when compared to the rest. It is in fact a prototype shirt that was never actually worn by the first team or released to the public.
It is the same as the 2011/2012 away shirt, with the only difference being the club crest. During the aforementioned season, the club were celebrating their 125th anniversary, and so a special crest was designed to mark this. However, like with any industry, prototypes are always made during the design process.
There are two explanations for why this shirt exists. Firstly, it could have been designed ahead of the 2011/2012 campaign before the celebratory crest had been designed and given to the club as an example. Secondly, it could have been a re-design for the following season, as back then, often the away kit from a season would be re-branded as the third shirt for the next year. Regardless of which one of these it is, it's a pretty cool example to have in my collection.
It is also the only shirt in my collection that is long sleeved. I don't particularly like shirts of this design, so normally go out of my way to get the short-sleeved version. However, due to the rarity of this shirt, I decided to purchase this one as it was available at a very reasonable price.
The idea of long or short sleeves does lead nicely to a former Arsenal tradition, and one that I am sad no longer exists. For years, it was the captains responsibility to decide if the team wore long or short sleeves, a decision that ensured all of the team looked the same. It may sound like a unimportant tradition, but it was something that set Arsenal apart as a club steeped in history and class.
Unfortunately, that tradition has stopped in recent years, which is yet another example of football moving away from these endearing subtleties. Football is now about comfort and whatever makes the players happy. The traditions of a club no longer hold the same significance as they once did and are now dominated by a drive for professional perfection.
And it is perhaps this lack of understanding of the heritage of the club that has prompted yet another abject display in a North London Derby. For the majority of us, we will be thinking about that loss for a long time. For many of the players, they may well have forgotten about it before they've made the short trip back to N5.
We care, do you?