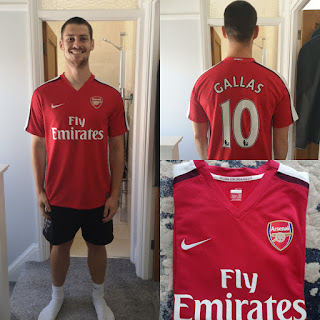 I own three separate versions of this shirt. Before any of you consider this excessive, allow me to explain. The first copy of this shirt I got was actually a present from my first girlfriend in 2009. It was a birthday present and was signed by Robin van Persie. On the face of it, this was an incredible present to receive; for someone obsessed with detail and authenticity, it was not.
I immediately spotted the fact that the shirt was a copy and not an official replica. With any football shirt, the giveaway is usually the club crest, and this shirt was no different. Still, I fought every ounce of my honest and autistic nature and simply smiled through gritted teeth. I'm certain this was not convincing. Then we come to the matter of the signature. The shirt didn't come with any kind of certificate of authenticity, so there is no way of guaranteeing that the signature is real. However, that isn't what I was disappointed with.
The part I don't like about any kind of autograph is the lack of a personal experience. I have obtained three autographs in my entire like; Sir Bobby Robson outside Highbury in 2005 before the North London derby; David Bentley during same season when he returned to the club while on loan at Norwich; and Eduardo da Silva in 2008 at a shirt signing at The Armoury. All three of these are personal experiences, they are memories that extend beyond a squiggle on a match-day programme or on the back of a shirt. They are occasions when I have actually met the individuals and so matter to me.
I have no interest in signed items that were obtained by other people. They mean nothing to me. So for someone to gift me a signed shirt, which is a tremendously thoughtful and generous gesture, I find it very difficult to display genuine gratitude. I'm fairly sure I am in a small minority that would react in this way to a gift like this.
The second version of this shirt that I have in my collection is a genuine replica, which instantly means it is allowed in my collection. There is another issue with this one though. Over the years, my Dad has taken me to a lot of games. We used to go to Highbury/Emirates, get fish and chips and have a fantastic day. Our family friend, Eric, once made the comment that my Dad looked like Bill Nighy, which to be fair, he does a bit. All of a sudden my Dad's name was no longer Mick, it was Bill. This became a constant reference for a number of years, which prompted me to buy my Dad a shirt for Christmas with 9 and Bill on the back. At the time, it felt like the funniest thing I had ever come up with. It wasn't.
Nevertheless, my Dad humoured me and wore the shirt. When I started this project, my Dad generously gave me all the shirts he had, including this one. I didn't feel right having this gift in my collection, especially as I will never actually wear it because, you know, it says Bill on the back. I therefore, replaced it with this shirt, which cost me just £15 (I can only assume this is due to the rather suspect name on the back). My Dad will be having his shirt returned to him shortly!
So there we have it, a look into my weird brain and my inability to even fake happiness and gratitude. I'm nothing if not consistent.