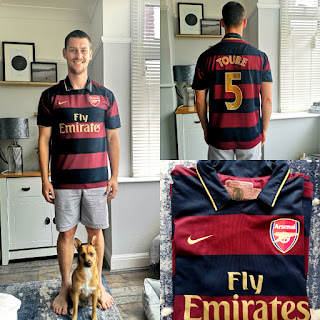 When I was attempting to take the photo of this shirt folded neatly, my dog, Bambi, decided to investigate the situation. This annoyed me, so I told her to get out of the way. Then when I put the shirt on, Laura complained that I have mentioned every member of my family at some point, so why has Bambi not got a mention? The argument that when this shirt was released, Bambi would have been minus ten years of age didn't wash, so here she is, posing eloquently with her Daddy.
It's probably good that we adopted Bambi as an already named two-year old dog, as had we had that responsibility, I would have inevitably tried to get some kind of Arsenal reference into her name. When I was at university, my friend, Sami, told me that her Dad had tried to name her Lanesra, which is Arsenal backwards, and I reckon a dog could pull that name off!
Anyway, back to football. My mental health has been a mess recently, which I have been very candid about throughout this blog project. However, the news that Bukayo Saka committed his long-term future to the club yesterday is honestly the best tonic that I have had for my recovery for some time. It is the first time I have felt genuinely positive about anything for a long while, which might sound ridiculous, but anyone who knows me or has read this blog will understand how important Arsenal are to me.
That commitment links well with the name on the back of this shirt, Kolo Toure. For the entirety of his Arsenal career, I don't remember there ever being a time when he was angling for a move away from the club. Whenever his contract was up for renewal, it was a simple and painless task which was never worthy of an column space in the transfer rumour columns.
Toure epitomises everything that a professional footballer should be. Signed for a meagre £150k in 2002, the Ivorian knew just how fortunate he was to play football for a living. As his stock at the club rose, and inevitably his salary and fame, he never allowed it to change him from the humble, hard-working young man that he was when he in North London as a complete unknown.
He is one of those footballers who everyone has a soft spot for. Throughout his entire career, there was never a bad word said about him. Even in 2011 when he tested positive for a banned substance, having reportedly taken a slimming product belonging to his wife, no one ever entertained the idea that this was anything other than a genuine mistake. Very few footballers carry this sort of standing in the game.
Anyway, here's one of the best pictures of all time to finish the blog.