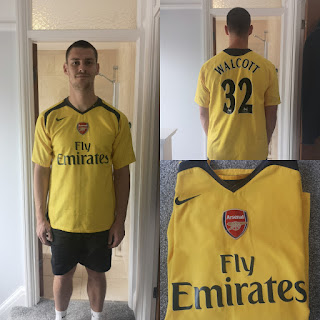 I was so excited when Theo Walcott signed for Arsenal. Had I seen much of him during his time at Southampton? No. Had I watched a lot of YouTube videos showcasing his talents? Absolutely. And as we know, this is how any real football fan scouts potential signings. I was convinced he was set to become a superstar.
Over the years, he has been a player that has divided opinion. He has often been touted as a speed merchant and a player who lacks a 'football brain', a really lazy assessment of a professional footballer producing the kind of numbers that Walcott has over the years. He is a man who scored over 100 goals for Arsenal Football Club, a feat that I don't think he gets anywhere near enough credit for. The counter argument has always been regarding the number of years he spent at Arsenal, but people forget that he arrived at the club as a 16-year-old and grew up as a player and an individual during the early years of his Arsenal career.
Arguably, the criticism has always been that he never achieved the heights that his talent might have enabled him to do, and maybe there is a case to be made for that. His pace and directness meant that he was a scourge to many defenders, and whenever Arsenal needed a goal, invariably Walcott was a pretty good bet to deliver this. I would put forward the case that he achieved what he was capable of, but unrealistic expectations were forced upon him from such a young age, that he was always going to struggle to emulate these heights.
Walcott spent many years determined to forge a career as an outright centre forward, and had football not drifted away from the traditional formation consisting of two strikers, he may well have done that. However, his style of play never really allowed him to be considered as a player capable of occupying the lone centre-forward role across an entire season.
Perhaps above all else, he understood what it meant to play for The Arsenal. He knew the history; he knew the honour; he knew how lucky he was; and he knew he had to give everything when he pulled on the red and white jersey. His career may not have yielded the trophies that both he and supporters would have hoped for, but he was a credit to Arsenal whenever he pulled on the shirt.
In recent years, there have not been many players who I have felt a genuine affection for. Theo was certainly one of these. On the day that it was announced that he was joining Everton, I felt sad. I immediately watched a video of all the goals that he scored for the club, triggering individual memories that I associate with each and every goal.
When he notched his first goal for the club in the Carling Cup Final in Cardiff, I was in the Arsenal end, celebrating jubilantly with my Dad, while suffering from Glandular Fever. Needless to say, my Mum was furious. Fast forward a few years later, and his goal to put Arsenal 3-0 up against Chelsea just moments after Cesc Fabregas had scored the second, genuinely almost made my Dad pass out in the North Bank.
There are so many memories I could share, but those two are probably the highlights. He may not have won the hearts of everyone, but I for one loved Theo Walcott.