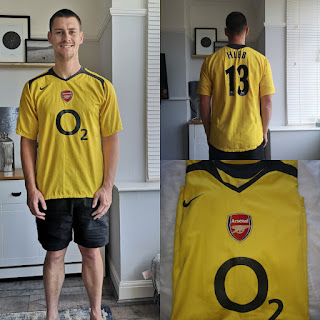 Quite often when I write these blogs, I don't necessarily write about the player on the back of the shirt. It sometimes feels a bit obvious and runs the risk of me just letting reminiscing about particular goals or moments, which I'm not sure are all that interesting to read.
However, today I am going to talk about the player in question, and that man is Alexander Hleb. The other day, I was playing a game in my head where I had to list players who were the only ones from their country to play for The Arsenal. Unbelievably, I forgot about the clubs sole Belarusian representative.
He was a player who divided opinion, like so many others that have come and gone in the post-invincible era. Some loved his dribbling ability and directness, while others disregarded his talents due to his inconsistent end product. Nevertheless, I found him exciting and admired the ease at which he could carry the ball forward.
Hleb's strengths weren't necessarily his goal scoring or even his assists. He was far more adept at the phase before either of those; the pre-assist. Whenever I see this term brought up, it is usually met by opposing supporters accusing others of creating a new measure in order to justify a players ability. For anyone who truly understands football, they will be able to see how vital this phase is.
Quite often, particularly the way that Arsenal played during this time, attacks were made up of trying to get the ball in behind the defence before cutting the ball back for a tap in. For this to work, the pre-assist is the most important element of the move. This is where Hleb comes in.
He had a way of drifting in from either the left or right, narrowing the pitch and finding gaps to dissect defences. Take the Champions League quarter-final against Juventus in 2006, Hleb played a slide-rule pass through for Cesc Fabregas, who cut the ball back for Thierry Henry to tap home. All crucial elements, but without the precision of Hleb, the goal cannot happen.
When he left the club to join Barcelona at the end of the 07/08 campaign, his departure was met with anger and disgust. As much as some of us love Hleb, it was pretty obvious that he was not good enough to play for them, and therefore it felt like a move dictated by money as opposed to play time. When Hleb returned to the Premier League in 2010 to sign for Birmingham City, he angered the supporters of his new club during a candid interview about his time at Arsenal and regret over his decision to leave. He even suggested, prior to a game against his old club, that he would much rather be playing for them than the Blues.
As opposed to sounding like an elitist player who felt he was now at a level beneath him, he sounded like a man with genuine regrets and sadness about the direction that his career had taken. Of course, the interpretation here is probably very different if you are a Birmingham City fan, but from an Arsenal perspective this is the narrative I choose to follow.
For a long time, players who departed Arsenal and Arsene Wenger rarely went onto achieve more than they did in North London. Whether players transferred domestically or to another club in Europe, the peak of their career more often than not happened in the red and white of Arsenal, for a years, a testament to Wenger's ability to allow players to move on at the right time.
This has arguably never been more apt than in the case of Hleb. Leaving the club at the age of just 27, he was never able to regain the form that had made him so effective in an Arsenal shirt. A series of short-term moves to clubs in Turkey, Belarus and Russia have seen him become something of a journeyman over the past decade.
The 07/08 team is genuinely the last squad that I felt utterly in love with. Every player of that side holds a fondness within me, and perhaps this is the reason I romanticise players like Hleb so heavily. It is however, a team that will always ignite warm memories of exciting football. Alexander Hleb was a massive part of that.
A love of a player doesn't always have to be based on anything specific. They just have to have meant something to you at a certain time. Hleb was only at the club for three seasons, but he made an enormous impact on me. It doesn't matter to me if anyone agrees with this, and it really doesn't matter how many goals or assists he claimed in his time at the club. Why? Because he wore tiny shin pads and was good at the pre-assist! 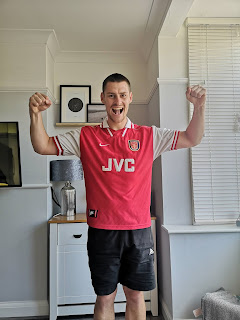 Finally, when I write a blog on a match day, I usually keep the shirt on for the rest of the day. However, as it's the North London Derby, I have to wear red. Come on you Gunners!!