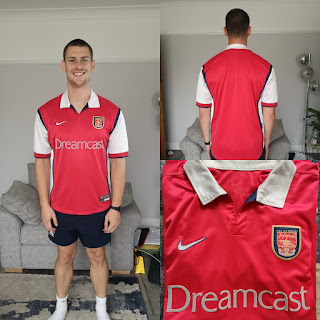 In 1999, the future of Arsenal Football Club changed. Nicolas Anelka had forced his move to Real Madrid for a reported fee of £23million, leaving Arsene Wenger and Arsenal with the daunting task of replacing the Frenchman's pace, power and goal scoring flair.
Enter Thierry Henry. Arriving from Juventus for just £11.5million, the signing ensured that Arsenal also had the funds to pay for a brand new training facility, something that has been a source of satisfaction and humour amongst supporters ever since.
Before writing this blog, I asked my brother if I had written a piece dedicated to Thierry Henry. I figured I must have at some point, given what he has done for our club and my love for the man. When it became clear I hadn't, this entry became a whole lot more fun and exciting to write!
As a young supporter, I wasn't aware of much beyond the English Premier League. Subsequently, whenever Arsenal signed any player from abroad, I usually had no idea who they were and so would be simply excited at the prospect of a shiny, new signing and a potential player for the back of one of the kits for that year. Henry quickly became so much more than that.
It may have taken him seven games to get off the mark, but once he did, he simply didn't stop. Throughout his time at the club, he had a running rivalry with Manchester United's Ruud van Nistelrooy, but the comparison should stop at the fact they were both goal scorers. In every other regard, they couldn't have been more different. Whereas the Dutchman was a great goal scorer, Henry was both this and a scorer of great goals. He could collect the ball from inside his own half, beat four players and put it in the back of the opposition net. Very few players can do that with the consummate ease that Henry would routinely demonstrate.
In his first season at the club, he scored 27 goals, an exceptional return for a player arriving in a foreign league. Fans had feared how Arsenal would replace the 19 goals that Anelka had scored in the previous season, but those fears were soon allayed. Anelka had been a formidable and exciting prospect; Thierry was something else entirely.
He displayed athleticism that would have surely made him a formidable sprinter, but somehow managed to maintain and combine this with graceful elegance while travelling with the ball. He was the complete centre forward.
Such was his dominance and impact on football as a whole, that he revolutionised the number 14. He transformed an otherwise indifferent squad number into one that every football fan now associates with him, while every centre forward arriving at the club yearns for the honour of donning those two digits.
When I think of the players of my childhood, it makes me proud that not only have they played for my football club, but that I had the honour of seeing them in the flesh. There is however, a tinge of sadness that it is going to be a tall order for me to see players of this calibre at Arsenal again.
I could start writing about any number of Thierry Henry goals, but this seems unnecessary. Instead, spend your time watching these yourself. When Henry left Arsenal for the first time in 2007, the club released a DVD with a story of his career and also an extra feature which was every one of his then 226 goals back-to-back. I still return to this DVD every couple of months to remind myself of the genius of Thierry Henry. During lockdown, I have watched this three times.
No player is bigger than a club, but great players like Thierry Henry knit themselves into the fabric of the history to make their names synonymous with what the club represents. Henry may have left Arsenal years ago, but stories of his brilliance will be told to future generations for years and years to come.