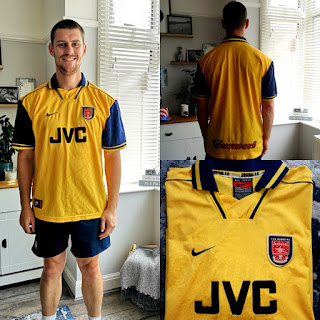 I see one goal when I look at this shirt; Dennis Bergkamp in the FA Cup away to Sunderland. If you haven't seen it, then you should watch the video I've included in this post. If you have seen it, then you should watch the video I've included in this post.
In football, it is tradition for any player who scores a hattrick to be given the match ball. Dennis Bergkamp should get the match ball for this goal alone. How can anyone score a goal like this, yet make it look so ridiculously simple? And the mad thing about Dennis Bergkamp is that he would routinely score goals of equal magnificence.
This is why I find it so shocking that so many question whether he meant to score his famous goal against Newcastle United in 2002. At what point of his career did Dennis Bergkamp give any indication that this touch was not in his locker!? And even if his first touch to ghost past Nikos Dabizas wasn't quite as he meant, how many players would have the ability and composure to re-examine the situation in a millisecond to score that goal?
Dennis Bergkamp transformed Arsenal Football Club. He joined at a time when the Gunners had become stale and the hunt for trophies had dried up. The English core that had been so successful in the early nineties badly needed refreshing, and the arrival of the Dutchman certainly did that. There have been countless interviews by teammates who have lauded him for his professionalism and lifestyle, attributes which soon rubbed off on the rest of the squad. This became the standard rather than the exception.
This was not an Arsenal-specific issue. English football still existed in a mantra of work hard, play hard, while the rest of Europe saw the game in a different light. As foreign players started to infiltrate the Premier League, and the money involved began to increase, there was only one direction for English football to head. Dennis Bergkamp helped to fast-track this.
There are few players in the history of the game who can make everyone around them better. Dennis Bergkamp is one of these players. Anyone who doesn't rate Dennis Bergkamp, does not understand football. Football is of course a game of opinions, but there are some things that are simply fact. Dennis Bergkamp was a genius.
Upon his arrival, he was criticised by many, after it took him a whopping seven games to score his first goal for the club. Then Tottenham owner, Sir Alan Sugar, famously quipped that Dennis Bergkamp was a waste of money, and that Spurs had made a better signing in Chris Armstrong. Now, I don't think I'm being harsh here, but unless you are a Tottenham fan or a committed football supporter, then you probably have no idea who Chris Armstrong is. Everyone knows who Dennis Bergkamp is.
You've probably noticed that I have referred to the great man as 'Dennis Bergkamp' whenever I have named him. This isn't poor journalism, this is a conscious decision. This is a mark of respect to an individual who is arguably the greatest player to have represented Arsenal Football Club.
It shouldn't matter who you support, you should love Dennis Bergkamp.