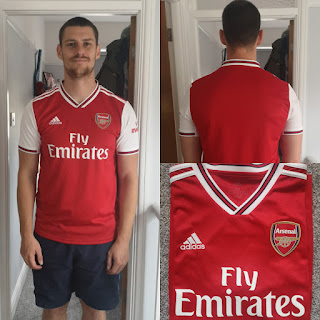 It's a good thing I bloody love this shirt, because I have bloody hated this season! Regardless of what happens sporting-wise, this campaign will forever be associated with the year of the Coronavirus; that is before I even consider the fact that Arsenal currently sit 10th in the table and face a real battle to merely achieve a top-half finish, let alone anything else.
For the entirety of the Puma era of shirts, I didn't really buy many of them as I really was not a fan of the designs. It felt as though they were really lazy in producing kits and were only interested in firing out as many as possible, regardless of what they looked like. Obviously, I have now gone back and purchased all of them, but that has only been on the back of deciding to undertake this project. When Adidas took over the responsibility, I could not wait to get my hands on their classic designs. From the second they dropped their incredible kit announcement video, pulling in the services of Arsenal legend, Ian Wright, I knew I was going to pre-order it.
The second it arrived in the post, I pulled it on and just smiled. If ever a shirt deserved trophies, it was this. There is still a faint possibility that Arsenal might end the season with an FA Cup victory, but seeing as the Gunners have been drawn to Manchester City in the semi-finals, it does seem a tall order.
I suppose in a way, this shirt is probably responsible for this entire project. The feeling I felt when I bought this gave me a similar sensation that I used to get when my Mum and Dad bought me a shirt as a child. I just wanted to wear it, although I did spend the first few weeks nervous about doing so as I didn't want to damage it! This feeling, coupled with the boredom and void that has been left by not being able to attend games, have completely resurrected my passion for football shirts.
I really cannot put into words just how bad this season has been. It is as poor a side as I have seen at Arsenal since I seriously started supporting the club in 1997. The factors behind this substantial decline are tenfold and are worthy of an entire dissertation in order to dissect this. But at least we have a nice shirt.