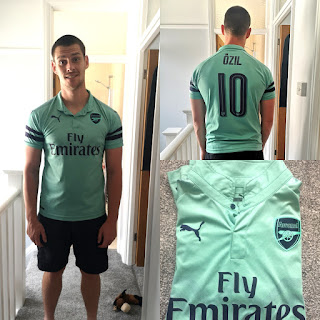 I'll be honest, when Laura brought this shirt out for me this morning, I didn't have a clue what to write about. I decided that I would go for a run, in the hope that my brain would kick into action and produce a story worthy of publishing. Having returned home, I realised I was no closer to finding anything even slightly uplifting.
In reality, that is kind of the point. Arsenal began the 2018/19 campaign with Unai Emery in the dugout, having replaced Arsene Wenger during the Summer. For the entirety of my life as an Arsenal fan, all I can remember is Wenger being the Arsenal boss. As a really young child, I even thought that his first name, Arsene, was because he was named after Arsenal Football Club. Then again, I also thought that people that used brown canes to help them walk were half blind, so maybe I wasn't the sharpest tool in the box.
Nevertheless, Emery being in charge represented a major but necessary change at the club. The season became a campaign that promised so much, but delivered so little. Arsenal finished the season in calamity, blowing two opportunities to qualify for the Champions League through implosions in both the chase for the Premier League top-four, and the Europa League final.
My abiding memory of this particular kit is a trip to Anfield just after Christmas. I had persuaded my brother to make the journey with me, and we made our way up to Merseyside with fairly little belief that Arsenal could get a result. However, this was my first visit to Anfield, so I was excited at the prospect of seeing one of English footballs most iconic venues.
When we got to Merseyside, we decided to park three miles away from the ground, seeing as both of us had been taught by our Dad to never pay for parking unless it was absolutely impossible to avoid. When I graduated from Brighton University, my Dad parked the car two miles up a hill, which meant that we both had to walk to my graduation ceremony in two piece suits on the hottest day of the year. By the time I paraded across the stage to collect my degree, I looked as if I had just completed the Brighton marathon. Had my brother and I learnt our lessons from my Dad's mistakes? Absolutely not.
Once we had made our way to Stanley Park, we bought ourselves some pre-match pizza and sat on a bench, watching Paddy Power videos mocking Liverpool fans mapping out their potential victory parade later that year. When it was finally time to enter the stadium, we excitedly went to our seats. Located at the back of the lower tier, we then understood why our tickets had some small text reading 'restricted view'. I have never had a worse view at a football match. 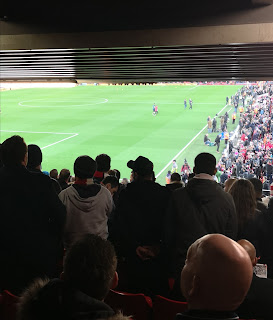 And then it happened. The moment that always happens. That dangerous thought..... We might win this! Just eleven minutes in and that dangerous thought magnified ten-fold as Ainsley Maitland-Niles bundled home at the far post to give the Gunners an unlikely lead. What made that moment even more incredible, was that I was JUST about able to see the final touch!
Fast-forward 34 minutes and that dangerous thought had been well and truly extinguished, with Liverpool racing into a 4-1 lead. In the second half, Liverpool added a fifth to compound what had been a truly miserable away day. At least we couldn't see much of it.
The manner of the defeat also served to highlight the cracks already appearing in Unai Emery's stewardship. To that point, Arsenal had suffered defeats but there was a feeling that Arsenal were becoming more difficult to beat. They had recently gone on a 22-game unbeaten run that had filled the Emirates with optimism, but history would go on to show us that this was merely papering over the cracks.
So there we have it, a shirt and story that truly demonstrates how far Arsenal have fallen. Mikel Arteta,  you have a hell of a job on your hands!