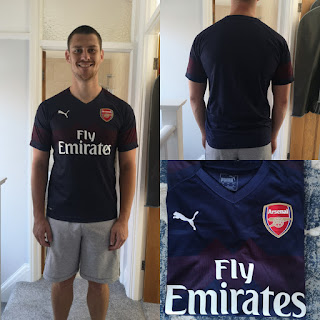 Part of my morning process in writing these blogs is to take the three pictures that I always include at the top. I quite enjoy this, as it gives me an opportunity to have a bank of images of me wearing all of them! Once I've arranged them into a nice collage, I then upload them to my email, to be downloaded into a file on my computer. I always choose to name the image something which I associate with the shirt; for instance many are simply named after players that come to mind. Today, I plumped for the title 'Oh'.
It's very difficult to get excited about this shirt. The year of Unai Emery; a calamitous end to the domestic campaign to miss out on a crucial Champions League spot; and a demolition in Baku at the hands of London rivals, Chelsea. However, the more I thought about this shirt, the more I began to realise just how much of a paradox my collection represents. Giddy highs and crippling lows, the Arsenal way is nothing if not unpredictable.
But, I often need to remind myself of the privileged position that my football club is in, and more importantly, how lucky I am as a supporter to have witnessed the things that I have seen. In the last year, Bury Football Club have ceased to exist. Those supporters will never be able to see their team again, something which I cannot imagine having to deal with. When this awful situation occurred, I listened to a lot of podcasts and radio shows on the matter, and it was genuinely hard to listen to the despair and anguish being felt by these people.
Bury were a very modest and small club in comparison to that of the Premier League, but they were a proper community club. Many locals, as is the case for so many towns, base their lives around visits to Gigg Lane, a routine that has been cruelly snatched away. Many described the feeling as similar to if a loved one had passed away, and I don't for a second think this is in anyway excessive. This is what football clubs mean to us.
Therefore, for me to complain about my club losing a European final seems insulting to the supporters of clubs such as Bury. In my lifetime, Arsenal have won four league titles. Many will never see their club lift any silverware. Regardless of the predicament that Arsenal are currently in, the alternative is quite frankly, terrifying.
Football expectations are however, relative. Will I think about the fait of Bury next time Arsenal lose a Premier League match? Probably not. Today however, they are at the forefront of my thoughts.