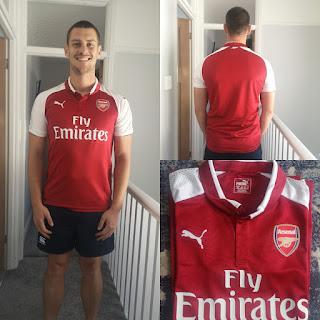 "Well done, bye bye" -  I'm welling up just thinking about those final words uttered by Arsene Wenger. The man who galvanised every press-conference with his romantic and articulate approach, perhaps it was fitting for his last sentence to be so simple.
I will forever feed indebted to the Frenchman. Throughout my life as a supporter, he was an ever-present. Game after game, season after season, the idea of him not parading up and down the touchline did not bear thinking about. Towards the end, we all knew it was time for Arsenal and the most successful manager in the clubs history to part company, but that did not make his final moments as boss any easier.
As he was presented with the golden Invincibles trophy, I'm not ashamed to say that I shed a tear. This was a celebration of possibly his finest hour at the club, followed by the unerring realisation that it was over.
On two occasions as a child, I took the time to write to Arsene to ask for an autographed photo. On both occasions, he responded with a genuinely individualised letter and of course, a signed picture; just another example of the class that he emitted throughout his time in North London. These moments simply served to amplify my passion and love for the club. Arsenal Football Club are bigger than any individual, but Arsene sure complimented the culture and the history better than most.
He will always be one of my heroes, if not my absolute idol. Even when the going was tough, Arsene continued to act and serve the club in a dignified and classy manner. Of course he had his flaws, perhaps investing too much trust and loyalty into certain players, but there can be no doubt that everything he ever did was because he truly believed it was for the good of the club. Even in his final seasons, when he maybe should have stepped aside, I truly believe that he thought he could take Arsenal back to the summit of English football. He was paid handsomely, which some supporters criticised him for, but his love for the club overrode any personal financial gain.
I have often argued that his tenure at Arsenal should be split into three. The first set the tone, transforming the club into a genuine contender for major honours. Three league titles and four FA Cups are testament to this. Arguably, his second period was even more impressive, and I think he is only now getting the credit for this. Arsene Wenger oversaw the transition from Highbury to Emirates Stadium, and chose to remain loyal to the club despite being acutely aware of the financial restrictions that would be placed on him during this period.
The steady flow of trophies had dried up, and despite several spirited title challenges, Arsenal always came up short in the final few months of the season. Significantly, Arsene ensured that Arsenal remained in the Champions League, season after season, crucially securing much-needed finances to allow the club to remain competitive during this difficult period. Often, images of starting XIs are shared from that time, followed by shock that Wenger was able to achieve Champions League football with them, a testament to the brilliance of the man.
Then we have his final period as boss, the time when he probably should have moved aside. Following the 3-2 victory over Hull City in the 2014 FA Cup final, he had finally ended a nine-year trophy drought that had so regularly been used as a pole to beat the club. This was his moment where he could have walked away as a hero, with his entire legacy intact. He chose to remain, with a genuine belief that Arsenal could end their wait for a 14th league title. Unfortunately, Wenger was never quite able to achieve this. Despite the dip in the third and final period of his tenure, Arsenal still clinched three FA Cups in four seasons. Arsenal supporters have high ambitions for the club, but for a team struggling and quite clearly on the decline, this cup haul is nothing short of exceptional.
So that leaves me with just one final thing to say. Thank you, Arsene. We are so lucky to have had you at our club. You changed the way that many see the game. Thank you, from the bottom of my heart.