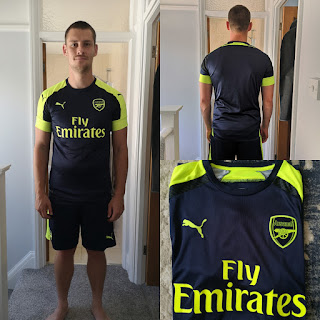 Right, let's address one thing before we begin. I am not normally a full-kit wanker. I don't ordinarily get up, put on a full kit and then go forward with the rest of my day. However, I do have the shorts for this kit because they are really comfy and I pretty much live in them when I'm at home. When Laura passed me this shirt, I was already wearing these shorts; I didn't receive the shirt and then pull a John Terry. Anyway, for all intents and purposes, I am today, a full-kit wanker. If only I had the socks...… Watch this space!
Once again, this is a shirt from a fairly unextraordinary period of Arsenal's history, so naturally it has been a struggle trying to think of an interesting topic. However, there is one moment that really stands out from this shirt. Whenever I go to matches with my friend Andrei, we quite often play a game where we pick a shirt that a fellow supporter is wearing at random, and we ask each other which goals come to mind. For this shirt, the only place to start is with Mesut Ozil, and his outrageous winner against Bulgarian side, Ludogorets.
Significantly, this moment comes from the last time that Arsenal were in the Champions League. Up to that season, Arsenal had been an ever-present in the tournament since 1998. I must admit, I took this privilege for granted, and I would give anything to see Arsenal walking out to the familiar tones of the Champions League theme. A distant memory, and not one that looks like resurrecting itself anytime soon.
My main memory of Ozil's brilliance that night is largely from the aftermath on social media. Naturally, I took to twitter to wax lyrical about the genius of the goal, and as ever, the rest of the football community were quick to send Arsenal supporters crashing back down to earth:
"It's not a big deal, he's done it against a bunch of Bulgarian farmers, get over yourselves."
Firstly, the notion that all Eastern-European footballers are actually farmers always tickles me. Where on earth did this narrative even come from? How fat, middle-aged, balding supporters on their 15th pint of Stella can have the audacity to criticise any level of football is beyond me! Alas, that is the world we live in!
Secondly, what Mesut Ozil does for this goal is ridiculous. I mean, as a PE teacher, I can't even do this against my Year 7s. Have I tried to? I don't wish to comment. Ozil is doing this to a bunch of professional footballers, and everything he does in the move is perfect. A chip over the goalkeeper with so much precision that the goalkeeper is millimetres away from stopping the German. If I had done this in Sunday League football, I probably would have been so excited that I would have fallen over the ball. Not Mesut.
With nonchalant ease, he puts two defenders on their backsides before rolling the ball into an empty net. It doesn't matter that it wasn't against Real Madrid, it is football at its purest and most beautiful. Football can be so much more than sport, it truly can be an art form.
Football supporters have a way of dismissing anything that another club achieves. Whether this is a league title; a cup win; a victory over a rival; or as in this case, a winning goal, they always find a way of playing down the importance. It is a pre-requisite of being a fan. I have certainly been guilty of this in the past, probably in the last week if I'm honest, but I think I have got a lot better at distancing myself from rivalries in order to appreciate and applaud fantastic football. Often this is a begrudging admiration, but it is an admiration nonetheless.
Right now is a really tough time to support Arsenal. There is a plethora of uncertainty flowing through every aspect of the club, making the future of very uncertain. So Arsenal fans, take a step back, watch other teams, and try to enjoy them playing the beautiful game, because we sure as hell won't be seeing it at the Emirates anytime soon!