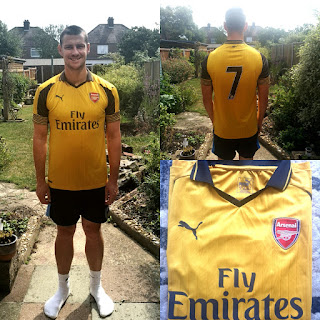 When I bought this shirt from eBay, I was instantly drawn to it by the fact that the shirt simply had the number 7 on it. I immediately thought, 'cool, how retro!'
When it arrived in the post, I held it up with excitement. Upon closer inspection, it turns out that the previous owner had simply removed the 'Alexis' lettering, presumably with an iron, and a faint outline of the name can still be seen. This does not deter from my initial attraction to the shirt, in fact, it probably makes me like it even more.
Over the years, I have a dreadful record of purchasing Arsenal shirts with player names, only for those players to leave the following season in acrimonious circumstances. As an adult, I don't really have a problem with wearing these shirts. They still represent a part of history and more importantly, a part of my life as an Arsenal supporter. As an adolescent, I refused to adorn the name of a former hero that I felt betrayed my love.
Many on social media are adamant that adults should not have shirts with player names on, and these people are often quite nasty in echoing this sentiment. My opinion however, couldn't be further from this. Looking at my collection, I have far more fondness for the shirts that have player names on, regardless of who they are. This small detail allows me to reminisce even more fiercely about the past, and quite often, reminds me of the trials and tribulations that have existed in my life. I find this a useful tool in life when I am having difficulties with my mental health, as it allows me to see exactly what I have achieved. Sometimes this helps, sometimes it doesn't.
In recent years, I have not chosen to buy shirts with player names on, perhaps influenced by the negative perception that is so often voiced. However, in filling in my collection, I have found myself willing to spend a little bit more on shirts that have names printed on the back, perhaps opening a window to a memory I had forgotten. As a child, I loved the process of selecting which one of my heroes I was going to wear on my back as much as buying the shirt itself. If we had a better team right now, maybe I'd get the same buzz!
Names can be removed from a shirt; they can sometimes even be wiped from the memories of supporters; but the contributions that these individuals have made to our football club cannot be erased from history.