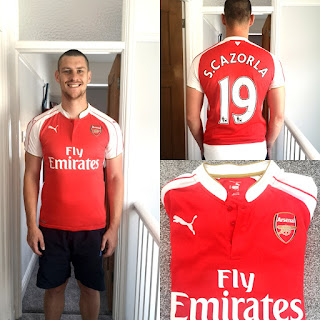 A couple of days ago, I wrote about the Arsenal career of Alexis Sanchez. Both my Dad and my brother reviewed my post by suggesting that it was "a post for the football purist", which was a narrative that I had not necessarily intended. Whenever I write these posts, I get given a shirt, grab my laptop and just see what comes out. This entry is likely to follow a similar pattern, so if you are a football purist, then you should enjoy it!
It had been a fairly quiet transfer window heading into the 2015/16 campaign, but Arsenal had added Petr Cech, a signing that seemingly addressed a weak point in the Arsenal squad (history would go on to prove otherwise). The Gunners kicked off the season with a 1-0 victory at Wembley over Champions Chelsea, thanks to a powerful, left-footed drive from Alex Oxlade-Chamberlain. There was real optimism on the walk out of the stadium that Arsenal were going to finally return to the summit of English football, following two successive FA Cup wins.
Fast-forward a week, and Arsenal were due to kick off the season at home to West Ham United. On the walk to the ground, both myself and my friend Andrei were unusually confident. Our usual pre-match predictions were not about whether we would win or not; they were about by how many we would win by. Ultimately, we both predicted a 4-0 win, a real statement of intent for the next ten months that would follow. Just 57 minutes into the opening day, Arsenal trailed by two goals, and two mistakes by new signing, Petr Cech.
Those two matches kind of summed up the campaign; a season that promised so much but delivered so little. There were some fantastic moments across the 2015/16 season; Arsenal ripping Manchester United to shreds in the opening 20 minutes; a Mathieu Flamini brace at White Hart Lane; Danny Welbeck returning from injury to head a stoppage-time winner against Leicester; but I remember the season most for the midfield partnership of Santi Cazorla and Francis Coquelin.
Since the departure of Cesc Fabregas in 2011, Arsenal had searched for a midfield that would enable the club to challenge for major honours. Alex Song; Abou Diaby; Denilson; Mikel Arteta; they had all attempted to transform Arsenal into a team capable of challenging once more. And although the pivot of Cazorla and Coquelin ultimately fell short, it has been the partnership that came closest.
They were a pair that complimented each other so well. Couple Cazorla's ability to link midfield and attack, with Coquelin's intense desire to protect the back four, Arsene Wenger had accidentally stumbled upon a pivot in which to build the rest of the team around.
When considering the respective histories of the two players, the combination becomes even more impressive. Cazorla arrived from Malaga in 2012, and had spent much of his time at his new club operating from a wide position or in an advanced attacking role. Coquelin on the other hand had joined Championship side Charlton in November of the previous season, before being recalled following a number of first-team injuries. With his contract set to expire in the summer, it had seemed his Arsenal career was trickling towards an uninspiring conclusion. But a series of impressive displays, significantly in a 2-0 victory away at Manchester City, earned the Frenchman a new deal. That game was also the fixture that showcased the blossoming partnership of Cazorla and Coquelin.
They were also two players who represented clear opposites. Santi Cazorla is arguably one of the most naturally gifted footballers that Arsenal have had. Rarely do footballers demonstrate such ability with both feet, that it is difficult to establish which is stronger. There is a famous video from the following season of Cazorla is preparing to take an out-swinging corner with his right foot. The Spaniard is then ushered to take a left-footed in-swinging corner with his left foot by Laurent Koscielny, and obliges with no fuss. This skill, coupled with his speed of thought, meant he was extremely difficult to defend against. From a deep-lying midfield position, opponents would struggle to lead him away from danger. The majority of footballers have a clearly dominant foot, so the logical defensive manoeuvre is to lead them away from this. With a player like Cazorla, that defensive weapon doesn't exist.
Coquelin on the otherhand, had limitations, but crucially, knew what they were. He knew his role within in the side; break up the attack of the opposition and distribute the ball to those that are better in possession. Coquelin, having arrived at Arsenal as a young prospect in 2008, had yet to find his role within the Arsenal side, and it had been unclear as to what kind of player he was. Finally, he had found his niche.
Ultimately, their legacy remains indicative of that period at the club; moments of breath-taking excellence overshadowed by an inability to make the final step. Sound familiar?