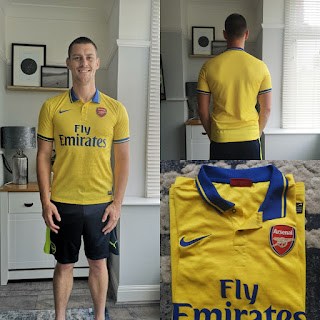 Before I begin todays post, there is something that I need to address. I posted yesterdays article on all of my social media channels, and it was really exciting to have a number of new people taking a look at my blog, including a certain Ray Parlour! 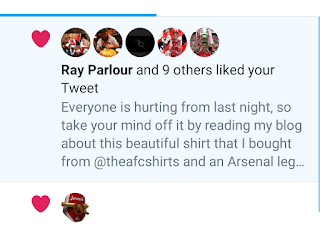 When I got that notification, I was like a child at Christmas (or perhaps a better analogy would be 'like myself at Christmas', seeing as I love it just as much as any kid!). Thanks for that, Ray!
Now, back to the shirt at hand today. With football finally returning on Wednesday, I've naturally spent a lot of time considering the current state of Arsenal Football Club. There are a number of aspects that need addressing, and have needed addressing for some time now. Not least, the role that Mesut Özil has at the club. Özil made is debut for the club in 2013, wearing this beautiful jersey, away at Sunderland. Within the opening quarter of an hour, the German did what he does best, assisting Oliver Giroud beautifully to kick off his Gunners career.
I have been a massive fan of Özil over the years; there is no doubt that he is an incredibly talented footballer. However, in recent years his role at the club has divided supporters almost as much as the 'Arsene in or Arsene out' debate. Many believe he is a luxury player who has no place in our team, while others will not have a bad word said about him. I'd consider myself somewhere in the middle of that debate.
When Arsenal returned at Manchester City on Wednesday, there was one notable absentee, and that was of course Özil. When Mikel Arteta was quizzed on the matter, he simply said that it was a tactical decision. The most alarming aspect of this, is that Unai Emery, Freddie Ljungberg and now Arteta have all arrived at the same conclusion at some point in their leadership of the club. Obviously, there is something going on behind the scenes, and we can all speculate as to what that is.
In the aftermath of Arsenal's 3-0 defeat at City, I found myself unusually riled by the whole debate regarding the German, and probably was a bit too dismissive of the opinions of others on social media. Many bought into the whole 'tactical decision' argument, which on the face of it makes sense. Would a player with a more defensive mindset be a better option to start against the reigning Champions? Quite possibly. But when a player on £350k a week cannot fit somewhere into a 20-man squad, there is quite clearly a bigger issue.
One of the main discussion points that I raised, was the opinion that Mesut Özil does not seem to care whether he plays or not. This may be a somewhat harsh point, and maybe I do not have the right to suggest that of him, but when a player of Özil's calibre is left out as often as he has been over the past two seasons and makes minimal fuss, it makes it easy to present the argument that he is happy to just take his pay cheque.
Arsenal's wage bill has been a point of conjecture for years, and Özil's salary has contributed substantially to this. It is not inconceivable that the money that is paid to Özil could be distributed to four other players, and four good players at that! This is not to criticise Özil for being on this contract; the club made the decision to give him this deal and therefore have to take sole responsibility for the current state of play. But it is fair to say that Arsenal are not receiving the return that they would have expected from a player on this kind of money.
I have always argued that if you put Mesut Özil into the right kind of team, he would thrive. Unfortunately for him, he has rarely been in an Arsenal side that truly brings out the best in him. He is a flare player who knits a team together; he is not a leader who will roll his sleeves up and raise the level of the rest of the team.
He has provided us with some incredible moments over the years; 19 league assists in the 2015/2016; ripping Manchester United and Manchester City apart at home in the same season; an incredible solo effort in the dying moments of a Champions League tie against Ludogorets; and his partnership with Alexis Sanchez. I will forever be grateful for those memorable occasions. However, it is, and it has been for a while, time for Arsenal and Özil to part ways.
The conversation around his involvement or lack of involvement needs to stop. The focus needs to be on the players of the future, who are more in-keeping with the style of Arteta. But with another year of his contract yet to run, and his consistent refusal to even consider an early departure, the club seems destined for another year of treading water.