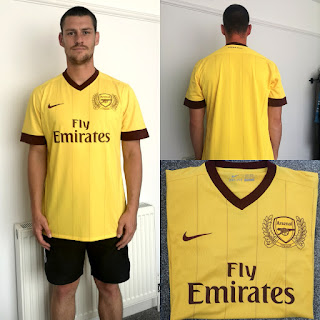 Arsenal Football Club wore this shirt on one occasion. It was never released for the public to purchase. The fact that I have managed to locate a player-issue shirt is really exciting. Many will see this shirt and be familiar with it, as it was the away shirt in the 2010/2011 campaign. As I have previously mentioned, many clubs used to simply turn their away shirt into their third shirt for the next campaign, which was the case for this shirt.
When I started making my list of shirts that I was attempting to collect, I wasn't sure if I wanted to include those that were never available to purchase. However, when I stumbled across this, I couldn't resist in adding it to my collection. The only difference from the away shirt from the previous season is the club crest that is used. During the 2011/2012 campaign, the club were celebrating their 125th year anniversary, and opted to include the above crest on all three of the shirts for that season.
The one game that Arsenal were forced to wear this shirt, was away to AC Milan in the first-leg of a last 16 Champions League tie. As the half-time whistle sounded, the Gunners trailed their Italian counterparts by three goals, prompting Arsene Wenger to bring on Thierry Henry, who had re-signed for the club on loan in January. The shirt holds particular significance as it was in fact the last time that Henry pulled on an Arsenal jersey, hardly the fairy-tale that he would have dreamt of.
In the return leg, Arsenal so nearly achieved the impossible. Three first-half goals left Arsenal on the verge of one of the greatest comebacks in the history of the competition, and had Robin van Persie converted from just two yards out to level the tie midway through the second half, it's plausible that they would have gone onto win the tie.
Oh what could have been.