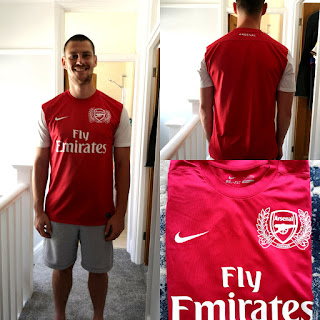 2012 was the year that I graduated from university. Thrust into the real world, it is usually a really exciting time; the moment where you are officially considered a grown up. Unfortunately, I remember that year for all of the wrong reasons. Just weeks after submitting my final piece of coursework, I found myself as an ASDA employee, furthering my education by learning all about fruit and vegetables. Two weeks into my new career, my Mum decided to have a heart attack and spend the next 4 months in hospital. Without question, I was living the high life!
Yet again, football rescued me. Having lost Cesc Fabregas and Samir Nasri during the off-season, Arsenal began the 2011-2012 campaign with a squad quite clearly struggling for quality. An 8-2 defeat at Old Trafford (even now, I can't believe we conceded eight goals), Arsenal entered into a flurry of activity in the final days of the transfer window, bringing in Mikel Arteta, Per Mertesacker, Andre Santos, Yossi Benayoun and Park Chu-young.
The Gunners struggled for consistency throughout the campaign, and had it not been for the excellence of club captain, Robin van Persie, it would be fair to assume they would not have qualified for the Champions League. In a year of total uncertainty, the Dutchman carried Arsenal from the first game until the last. On a personal level, this was the consistency I needed.
The transition from student to a working adult can be a tough and stressful period at the best of times, but my personal circumstances had made this an even more difficult time. My therapy that year, was Robin van Persie.
Game after game, week after week, van Persie produced magical moments that made him the envy of every other club in Europe. Finally, he had been able put a string of games together, something that his injury record had restricted him from doing in the previous years of his time in North London. He wasn't just scoring goals against the 'lesser teams', he was performing and providing crucial moments against Arsenal's rivals.
A hat-trick at Stamford Bridge; a brace at Liverpool; an exquisite volley at home to Everton; the list of moments from that campaign go on and on. On the final day of the season, Arsenal came from behind at West Brom to clinch a 3-2 win, ensuring that the club claimed the final Champions League spot at the expense of their North London neighbours. This, turned out to be van Persie's last game in an Arsenal shirt.
Following his incredible season, where he scored 37 goals, van Persie signed for Manchester United for a reported fee of £25million. It was a bitter pill to swallow. Most Arsenal fans had come to terms that he would be leaving, with Arsenal reluctant to allow him to enter into the final year of his contract, but nothing could have prepared us for his chosen destination. The rivalry that Arsenal had shared with Manchester United in the 90s and early 00s remained fresh enough in the memory for fans to consider this move unthinkable. How could he go there? Why did Arsenal even negotiate with United?
His transfer still hurts. He remains the last player that Arsenal have had that I truly loved. He is the last player that made Arsenal the envy of all other clubs. Whoever we played, we always knew we had a chance because of him. Robin van Persie may have soured his Arsenal legacy, but my goodness, he was a hell of a player!