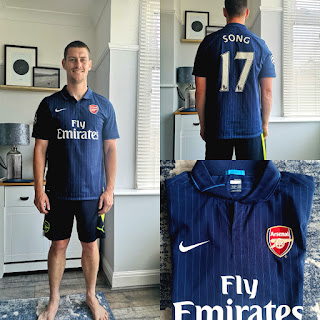 The timing of this shirt being chosen is quite remarkable. Only this morning, I responded to a tweet that had declared that Alex Song was an incredible leader and would have become one of Arsenal's all time legends had he been at the club longer than he was. I felt the need to point out how ridiculous this opinion was. Song had little leadership and although was a good player, was never more than that.
The fact that Arsenal fans were all in collective shock when Barcelona paid £17 million for the Cameroon midfielder highlights the stock that he had at Arsenal. Despite this, I was actually a fan of him. He offered a versatility that is difficult to come by. Primarily a defensive midfielder, he was also capable of filling in at centre back if required. He was able to rack up some impressive looking assists during his Arsenal career, although this was made considerably easier by having Robin van Persie to pass to. This shirt was actually a present from my Dad during my first year at university. I had a habit of choosing player names based on the position that I played. For a long time I fancied myself as a defensive midfielder, despite my obvious limitations making me far more suitable to the centre of defence. But hey, Song could play there as well so we're all good!
However, the story I remember most fondly with this shirt actually came the following year and season. I had moved into a different house with my friends Noddy, Houlton, Kieran and Luke. For my 21st Birthday, my brother had decided to visit me for a night out. The night went as most university nights go, with us all returning to the house in the early hours of the morning. Queue absolute scenes.
I had foolishly told Kieran a chant for Alex Song that had been suggested in the brilliant Alan Davies podcast, The Tuesday Club:
"Alex Dimitri Song Billong
He plays the holding role
He scores the occasional goal
And it's ALEX DIMITRI SONG BILLONG!"
At 3.30am, I was ensuring that my brother had bedding for the sofa, when Kieran came running down the stairs, with my Alex Song jersey on back-to-front, screaming the above chant at the top of his lungs. At this stage of drunkeness, the only thing to do was to join in! For some context, no one else in that house was an Arsenal fan, but all of us will forever know the words to this chant!
The following morning, we awoke, feeling worse for wear, to a loud knock on our front door. I drew the short straw and answered. I opened the door to find our next door neighbour, Shampooch (affectionately named because he owned a dog-grooming parlour of the same name - we never knew his actual name). Before he even spoke I went on the offensive:
"I'm so sorry, it was my 21st and it got a little out of hand. I can assure you it won't happen again. I'm really sorry"
He accepted my apology, turned around and shook his head. He knew this was a lie. Thanks for never getting us evicted, Shampooch.