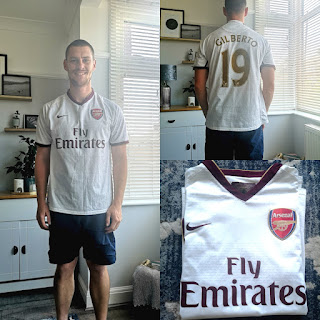 I like words. I would consider myself to have a pretty good vocabulary, but I sometimes worry that by using unnecessary words, my writing can come across as a little pretentious. In reality, this is probably a manifestation of my own paranoia and based on nothing but my own insecurities. Nevertheless, ambiguity, meaning to have two conflicting thoughts, is the word that springs to mind when I see this shirt.
On the one hand, I genuinely think this is a beautiful shirt. It has so many subtle characteristics that make it incredibly endearing. The white is offset with red-currant, a hark back to the 2005-2006 Highbury farewell shirt, and of course the first colour that Arsenal wore when they moved to Highbury in 1913. The shirt also represents Herbert Chapman, Arsenal's revolutionary manager during the 30s. He was responsible for so many of the subtle things that are associated with the club, not least the introduction of white sleeves, something this away shirt is meant to celebrate.
On the other hand, I struggle seeing Arsenal wear white, as it makes me think of that lot down the road. In researching this piece, I learned that prior to the 70s, Arsenal actually used to wear white for the majority of their away shirts, so it is actually quite a nice historical connection. Even so, I still prefer seeing the Gunners in yellow and blue!
Ambiguity is also a word that I think encapsulates the opinions of many of the player on the back of this shirt, Gilberto Silva. He was a fantastic defensive midfielder who did a tremendous job for Arsenal, but he is a player who never stole the limelight. Football headlines are reserved for the match winners, the players who can create something from nothing to turn the tide. Gilberto was seldom the main focus, but without him, Arsenal would not have remained unbeaten for 49 games.
I love Gilberto. There, I said it. He is undoubtedly one of my favourite players of all time. I felt his presence in the side embodied my own relationship with football. I was never a flashy player. I never scored or created many goals. But I knew how to do the dirty work. I knew how to defend and rub opposition players up the wrong way.
As a child, whenever I pulled on an Arsenal jersey, I would try and replicate that player in my own game. My passing range wasn't particularly vast, so I failed when wearing my Fabregas shirt; I'm not particularly quick, so I failed when wearing my Henry shirt; I'm not particularly bald, so I failed when wearing my Cygan shirt; but when I pulled on my Gilberto shirt, I could produce a dogged display and thrive in passing the ball to players with more individual talent.
Gilberto was great. He always came across as such a calm presence off the pitch. Once the referee blew his whistle to start the game though, Gilberto became a tough and determined competitor, allowing Arsenal the platform to achieve success.
It is perhaps ironic that when I finally decided to buy a Gilberto jersey, he had lost his place in the side and was largely a peripheral figure to the younger and perhaps more energetic, Mathieu Flamini. At the end of the 2007/2008 season, Gilberto left the club to join Greek side, Panathinaikos.
He arrived at the club with a big reputation but as an unknown quantity. He left as a club legend.