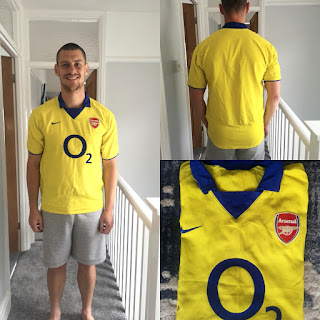 If any Arsenal fan doesn't instantly see Martin Keown towering over Ruud van Nistelrooy when they see this shirt, are they even an Arsenal fan!? Screaming like a child and dropping the People's Elbow as the final whistle blew, the image will always be associated with the great rivalry between Arsenal and Manchester United.
Throughout the 2003/2004 campaign, the Gunners of course completed the season without losing a game. The football that Arsenal were playing was unlike anything that England had ever seen, embodying the drive for perfection shared by Arsene Wenger. But their ability to grind out points, even when they were not playing well, is a trait that is seldom celebrated. Without the flare and panache of Thierry Henry, Dennis Bergkamp and Robert Pires, there is no question that Arsenal would not have completed this incredible feat. But the grit and determination brought to the table by the likes of Martin Keown, Ray Parlour and Lauren, are traits of equal importance.
When Diego Forlan was 'fouled' by Keown deep into stoppage time, my Dad, watching in our front room, slumped back into his seat. This felt a pivotal moment in the season, and seemed like United would yet again steal a march on Arsenal. From the moment that Steve Bennett awarded the spot kick, right up to van Nistelrooy starting his run up, my Dad had told me exactly why United were a bunch of cheats and how weak referees were at Old Trafford. We were gutted.
Up steps van Nistelrooy, surely he can't miss?
*THWACK*
"Oh he's missed it! He has hit the bar!"
Dad rises from his seat, punches the air and shouts: "JUSTICE!"
"Arsenal can't believe it, but they've got to get their concentration back because the balls coming back..."
"Not now, please not now"
"It's van Nistelrooy, with Keown all over him.... It's the final whistle! Arsenal do get their draw, but it's not finished yet, their all around Ruud van Nistelrooy."
"He deserves that, he's a cheating bastard!"

I loved that moment. Not just for what was happening on the pitch, but for my Dad's narration of the closing minutes. Did Martin Keown take things a little too far? Probably. Has there been many moments that have made me prouder to be an Arsenal fan? Definitely not.