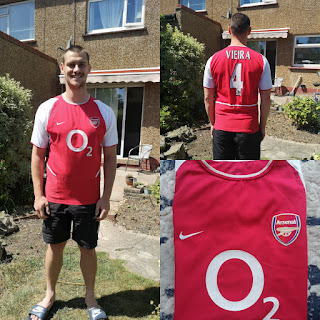 For the past two days, it has been a real struggle to come up with a topic that is worth writing about. Today's shirt choice is the total opposite. The second I picked it up, all kinds of memories came flooding into my brain. Often the term legend is bandied around far too often in football, but it is a term that applies to almost all of the squad that achieved what seemed like an impossible task; completing an entire Premier League season without losing a single game.
It is a story that everyone knows. From the moment Arsene Wenger first voiced his belief in his squads ability to achieve this feat in 2002, right up to Patrick Vieira rolling the ball into the back of the Leicester City net in the final game of the season in 2004, it is a tale that has been regaled time and time again.
Every season, when the final team loses their first game of the campaign, there is a collected celebration in and around N5. It is the one part of our history that separates us from other clubs; something that no other club has done before or since. In the current campaign, there was a real possibility that Liverpool could usurp this achievement, before a 3-0 defeat at Watford ended their chances of matching The Invincibles.
Arsenal drew a lot of games. I don't care, we didn't lose a game. Other teams have collected more points in a season. I don't care, we didn't lose a game. They were lucky. I don't care, we didn't lose a game.
Despite the pride and warmth that I have for that team, there is also a tinge of regret. Arsenal were head and shoulders above any other team in England, and there is a strong claim to be made that Arsenal were the best team in Europe at that time. We may have claimed our 13th league title, but it should have been a season where we won it all.
An FA Cup semi-final defeat to Manchester United was a bitter pill to swallow. Had Arsenal clinched the early goal that their dominance had warranted, the Gunners would have surely gone onto win the cup. Four days later, there was more heartbreak in the Champions League at the hands of Chelsea. Had Arsenal won that game, it would have given them a run to European glory against Monaco in the semi-final, and then Porto in the final. With the side that Arsenal had, I don't doubt for a second that they would have gone all the way had they beaten Chelsea.
Those two defeats still hurt. What could possibly heal those wounds? Winning the title at White Hart Lane goes some way to doing that.
Why did Sol leave the Lane!?