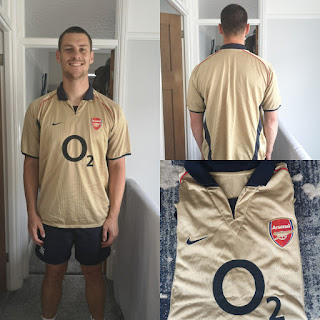 I found writing this blog far easier when there was no football on. It allowed me to have my memories and mood dictated purely by whatever thoughts were prompted by the shirt at hand. This morning, I am really struggling to feel any sense of optimism, as the stark reality of my football club sinks in. Following a 2-1 defeat at Brighton, Arsenal are in turmoil. A myriad of issues mean that there is no quick fix, and it is becoming increasingly difficult to see any light at the end of the tunnel.
The appointment of Mikel Arteta offered some genuine optimism. A young, upcoming manager with new and inventive ideas; a freshness and ingenuity that Arsenal so desperately needed. The forced suspension of professional sport allowed fans a chance to forget exactly where we were. The return has brought that reality crashing back home.
It is therefore a blessing that my fiancée produced this shirt as the selection for the day. Even the most devout Arsenal fans could be excused for not remembering much about this kit, so let me provide a brief context. During the 90s and early 00s, Arsenal would usually release a kit on a two-year cycle. This would mean that there would tend to be one new kit a year, as the home and away shirts were changed on alternate years. At the time, it also wasn't that common for clubs to have a third shirt, a marketing ploy that is almost unthinkable for clubs not to have in the modern era.
In the early years of the third shirt, clubs would often simply use the away shirt from the previous season, which is where this shirt comes in. In 2001/2002, Arsenal had this gold shirt as their away kit, with a couple notable differences. Firstly, Arsenal changed their sponsor from SEGA to O2; and secondly 2002/2003 was the year that Arsenal controversially updated their club badge.
I had once attempted to collect Arsenal shirts when I was about 15. This shirt, as any Arsenal aficionado will know, is a highly sought after item. It was the shirt that led me to give up on my shirt collection the first time round, as I didn't feel I would ever be able to firstly afford this shirt, and secondly find it anywhere. My mindset with anything has always been that if I cannot complete something, then there is not much point in doing it. Sometimes this attitude can be a gift and it has certainly allowed me to achieve a lot of things that I otherwise would not have been able to do. Other times, it can cause crippling anxiety and make my personality somewhat anhedonic.
When I decided to re-start this project, this was the shirt that I identified as my main target. Arsenal only wore this on two occasions; once in a 2-1 win away to West Bromwich Albion on Boxing Day; and again in the FA Cup semi-final victory over Sheffield United, a game famed for that save by David Seaman.
Finally locating this shirt (the less said about the cost, the better) felt like really pivotal moment. Not only had I achieved something that had always been a footnote in my support of my club, but it allowed me to demonstrate my sheer determination and desire to finish things that I have started. I am not a particularly confident person. I spend hours doubting every decision that I have ever made, often leading to me disliking myself and everything that I represent. Even writing this piece, I am anxiously fretting as to whether this body of writing expresses my passion for Arsenal and this shirt enough.
For many, it will be impossible to understand the importance and symbolic nature of this 'achievement'. It is an item that I have bought and nothing more. However, to me this does represent much more; it represents hours a searching online; it represents an innate love for Arsenal Football Club that can never be dampened; it represents me.