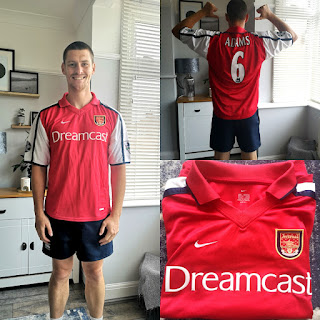 Tony Adams; Mr Arsenal. The only man in the history of English football to have captained a title-winning side in three different decades. From lifting the title at Anfield in 1989, to winning a second double in his final season in 2002, Tony Adams represented everything it meant to be Arsenal.
Like so many, I idolised Adams, but not just for his success on the pitch. As a teenager, I read his autobiography, Addicted, which of course documents his stunning career, but also focuses heavily on his struggles with alcohol addiction and his subsequent recovery. The book left me with a whole new admiration for the man, the greatest captain that Arsenal Football Club have ever had. From that point, I wanted to be like him (minus the alcoholism), and I can see a lot of parallels in our respective opinions of ourselves.
As a young footballer, I had long been unhappy that I had ended up as a central defender. After reading his book, I had a new appreciation for the role and embraced the fact that I was very good at it. I also briefly decided to attempt to learn the piano, having learnt that Adams had done the same! My musical talents were far worse than my defending though, so this hobby was short lived! But that isn't where the similarities really exist.
While the 2001/02 season went onto become one of the most successful campaigns in the clubs history, it also represented the most challenging period of my life. I had just started secondary school and had struggled to make the transition. After just a few months, I had to be removed from education due to depression, and I had developed a real hatred for myself. Adams had spoken about his struggles with his relationship with himself throughout his book, which eventually drove him to alcoholism. At such a young age, my emotions were already taking me down a similarly dangerous and damaging path.
Football was my release; it was the one aspect of my life that I felt could help me through anything, whether through playing or watching. Arsenal saved me that year, they really did. Without them, I'm not sure I would have had the strength to recover from the depths that I had fallen. That dependency has been maintained throughout adulthood, and no doubt will continue to be one of my key coping mechanisms for the rest of my life.
This is the power of football. It isn't just about winning or losing, sometimes it's not even about enjoying it. But it is about belonging; it is about not feeling alone; and for me, it is about feeling normal. Former Italy boss Arrigo Sacchi once suggested that "football is the most important of the least important things". Never have truer words been spoken.