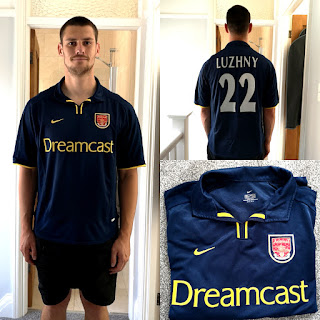 No, this is not a repeat of the now infamous 'Pascal Cygan debacle'. In fact, this was a very intentional selection only a few weeks ago. Naturally, in order to complete this project, I have had to extensively search for shirts from all corners of the globe. This one has been a particular struggle to locate. It is a shirt that I had as a child, with Robert Pires on the back. I wore it a lot and when I eventually grew out of it, I remember feeling really sad. It was shortly after this that I then started asking for shirts in adult sizes so that I didn't have to go through this again.
This shirt actually came from an eBay seller in the Ukraine, which explains why the only player to have played for Arsenal from that country is on the back. I had seen a couple of these shirts floating around, but as soon as I came across this one, I decided that I had to have it! Oleg Luzhny certainly falls into a similar camp to that of Pascal Cygan in terms of his Arsenal legacy, but I can now proudly wear this shirt and pretend I am marauding down the right wing and whipping a ball into Thierry Henry to give Arsenal the lead.
When I think about Luzhny as a footballer, there are two thoughts that come to mind. Firstly, my Dad cannot have a conversation about him without calling him 'One Leg' and commenting on the size of his quadriceps. The second story, is from a game against Southampton that I attended with my brother in 2000. We were sat in the North Bank, and despite having several opportunities, the game appeared to be heading to a 0-0 draw. Arsenal got a corner with just five minutes remaining, and bizarrely, Oleg Luzhny headed over to take the set piece. Like most others in the stand, my brother and I looked at each other, wondering why he was taking it. In comes the corner, up goes Patrick Vieira, and Arsenal have the lead and a crucial three points. Oleg, you take all the corners now!
Luzhny is also a type of player who divides opinion, especially in those who are perhaps not as invested in the sport as someone like myself. He isn't a flashy player; he isn't someone who will automatically be in the starting XI; and he isn't a player who is going to sell a lot of shirts (perhaps only one). However, he is a squad player, someone who can play in a few different positions and produce a solid, if not spectacular performance. Every successful team has players like Oleg Luzhny. A glance at some of the squads that Sir Alex Ferguson has assembled over the years is testament enough to this.
In an era of social media, where everyone can readily voice their opinion, every transfer is scrutinised and measured against the success of some of the most significant signings that a club has made. Arsenal twitter is particularly guilty of this. It takes just a few minutes of scouring transfer rumours to see the disgust that some Arsenal supporters spout when the club is linked to future signings. We have been spoilt over the years with some of the best players in the World, so this dissatisfaction is I suppose understandable.
However, Arsenal fans need to be realistic and understand the situation that we are now in as a club. We have dropped away from a club that competes in the Champions League every season, which makes us a lot less attractive to prospective signings. The types of players that we need to sign have to be building blocks to get the club back to competing at the top. It is not a quick resolution.
During the era of Oleg Luzhny, the signing of players like him was offset by more exciting additions; for every Luzhny, there was a Robert Pires. For now, that balance simply does not exist.