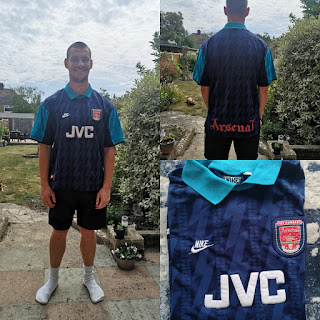 Today we have another shirt that I will always associate with my Dad. Along with the 1993/1994 away shirt that I have previously written about, this was another jersey that he always wore. Virtually all of my memories of going to games with my Dad involve him wearing this over-sized shirt as one of fifteen layers during the winter months. It is a shirt that I have enormous fondness for.
However, the season itself was a trying time in the history of Arsenal Football Club. Manager George Graham was sacked midway through the season, after almost nine years at the club, following a scandal involving the acceptance of illegal payments for players. The Gunners lost 17 league games during the season, resulting in a 12th place finish in the Premier League.
The saving grace however, was another successful run to the final of the Cup Winners' Cup, where they would face Real Zaragoza in Paris. Having defied the odds to win the trophy the previous season, there was belief that the year could still be saved. Stuart Houston had taken over as caretaker manager following the dismissal of George Graham, and while this did not prompt an upturn in fortunes domestically, Arsenal still had a great opportunity to end the season on a high.
My Dad had been caring for my Great Grand-Uncle, Stanley, and had watched the second-leg of the semi-final victory over Sampdoria with him. When the final whistle sounded, Dad had started planning the trip in his head. Stanley then offered my Dad £100...… not to go to the game. Stanley knew that he was nearing the end of his life, and did not want to be without the man who he had become so dependant on. My Dad, being the man he is, of course agreed not to go.
Just days before the final, Stanley sadly passed away. Meanwhile, our next door neighbour, Bill, and our family friend, Eric, had travelled to France the day before the final to purchase tickets from a tout. They returned, and Bill passed Dad a ticket for the final over the fence with just one condition..... he had to drive!
Now, my Dad is a Dow, which means that things don't often go to plan. Upon arrival, it transpired that the tickets were in the Zaragoza end. Rather than being refused entry, the stewards simply moved them into the Arsenal end, where there were no seats to for them to sit. The aisle would have to do! As someone who goes to as many games as I do, this story is completely alien to how modern supporting is!
As all Arsenal fans will know, that final is famous for one thing and one thing only; Nayim from the half-way line. Yeah, let's not talk about that anymore.
It was a tough season for Arsenal and a difficult period for my Dad emotionally. However, it is a story that has been told to me by my Dad on more occasions than I can count, and arguably the tale from my childhood that I look back on with most fondness. Football isn't just about your own individual experiences, it is about the stories and memories that are passed down through generations. No doubt when I have children, this story will be passed on to them.