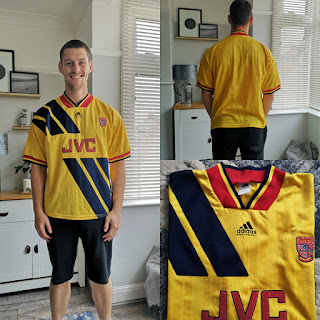 For every shirt that I have written about so far, I have been able to relate personal experiences to the great sides that proudly wore the cannon on their chest. This shirt however, is a slightly more difficult challenge. I was not old enough to recall much about this particular squad under the management of George Graham, but it is a jersey that prompts emotions perhaps even more powerful than many of the other shirts that I have, and will write about.
That is not to say that I could not wax lyrical about the players that donned this famous kit. Ian Wright; Paul Merson; Kevin Campbell; I can see them all hitting the back of the opposition net. But to write a post about a time that I don't recall personally seems almost disingenuous. Learning the history of your club is something that I don't see as an option though, it is a responsibility that true supporters take on with pride. I was not alive when Arsenal clinched the title at Anfield in 1989, but I still look back to that success and feel privileged that that is a piece of the history of my club.
During the 1993/94 season, I was well on my way to being groomed as the Arsenal supporter I am today, but my nostalgia for this shirt actually has nothing to do with football. My abiding memory is of my Dad wearing this exact shirt, which I feel honoured has been passed down to me. The sight of this shirt instantly takes me on a trip back to my childhood and the outings that my Dad would take my brother and I on.
Arsenal is in our blood, and it is an honour that has proudly been passed down through the generations. My great grandad was born near the clubs first stadium in Plumstead, South London, before the controversial re-location to North London in 1913. It is unthinkable that anyone in my family could support anyone but the Gunners. The greatest moments of my life have largely been experienced within a football stadium, and these memories have invariably been shared with my Dad.
He has often joked, particularly throughout the recent barren years, that he feels bad that he passed this life sentence onto me. Can it be tough supporting Arsenal? Of course. Would I change my colours if I had the choice? Absolutely not.
Football on its own is fantastic. Sharing it with your Dad and best friend, is even better.