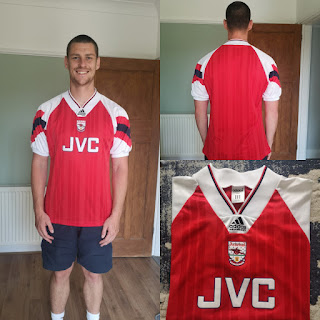 The 1992/1993 season saw Arsenal clinch a double in more ways than one. A domestic cup double; a double of unlikely heroes; a double of clashes with Sheffield Wednesday.
The Gunners won both the Coca-Cola Cup and the FA Cup, triumphing over Sheffield Wednesday on both occasions, a unique occurrence that has not been matched either before or after. Both victories are famous for more than just silverware. The Coca-Cola Cup victory saw Steve Morrow score the winning goal in a 2-1 win at Wembley, and even that is not what this final is remembered for. In fact, it is the celebrations that followed.
In the aftermath, Tony Adams attempted to lift Morrow onto his shoulder in jubilation, only to drop him and inadvertently break his arm. This is one of the many things I love about football. So often, the stories that accompany victories end up being a major part of the fondness that supporters hold. Yes, it was an unfortunate moment for Steve Morrow, but it is an occasion that will always be remembered in the history of the club.
Just a month later, and the two teams were back at Wembley for the FA Cup final. After 120 minutes of football, the score remained level at 1-1, forcing a replay (this was the last time an FA Cup final went to a replay, with the rules changed in 1999 to ensure a winner is found on the day). In the second game, Arsenal and Sheffield Wednesday were again locked in a stalemate, deep into extra-time. With the tie destined for a penalty shoot-out, up stepped Arsenal's second unlikely hero, Andy Linighan. The Englishman towered highest to powerfully head the ball past Chris Woods, ensuring Arsenal became the first side to win both the League Cup and FA Cup in the same season.
Fortunately in the celebrations, Tony Adams didn't drop Andy Linighan! The 1992/1993 season is a year of celebration in the history of Arsenal Football Club, but it also represents a shift in the culture of the club. Just two years before, Arsenal were Champions and at the height of English football. In the years that followed, they had become an effective cup side and despite their success on this front, they lacked the quality and consistency to challenge for the league title.
Arsenal's history is littered with incredible cup final moments produced by incredible players. Charlie George laying on the Wembley turf in 1971; Charlie Nicholas' brace over Liverpool in 1987; Aaron Ramsey notching crucial winners in two FA Cup finals; and thanks to 1993, Steve Morrow and Andy Linighan's names sit proudly alongside this illustrious list.