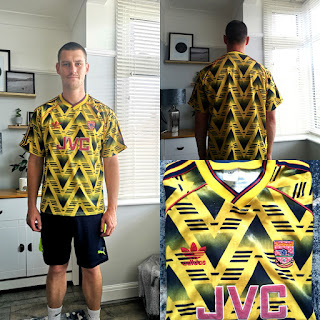 After three months of absence, Premier League football returned last night. Arsenal lost 3-0 away to Man City. I want football to go away again. That's it, that's the blog.
At least I have 400 football shirts to look at to cheer myself up, and todays selection is an absolute belter. I received this in the post yesterday from the brilliant The Arsenal Shirts, and I have to admit it is as excited as I have been in a long time. It is a shirt that has forged a cult following since it's arrival in 1991, making it one of the most sought after collectors items for any curator of Arsenal paraphernalia.
When Adidas issued their re-boot of the shirt back in December, I unfortunately did not manage to get one. However, as I now have an authentic original, I really don't care!
Once again, this shirt comes from a period of my life when I was hardly eating solids, so realistically I'm not going to have many personal experiences to draw upon. Therefore, for no reason other than the fact his hair was a sensational accompaniment to this shirt, I'm going to talk about one of my all-time heroes, Ray Parlour.
Ray Parlour is famous as much for being a footballer as he is for his comedy talents. Parlour has a way of telling stories of his time as a footballer that instantly capture the attention of anyone who is willing to listen. As a prominent football pundit for TalkSport, some of his tales are naturally regurgitated time and time again. Do they ever get boring? Absolutely not. Do I spend more time in the bath than I care to admit searching YouTube for Ray Parlour Telling Stories? Absolutely.
I'm not even going to attempt to re-hash any of the fantastic tales that he has shared in the past; I would be doing the Romford Pele a disservice if I were to do so! Instead, have a nice long bath, get yourself onto YouTube, and listen to the man himself talk about destroying his England career through an encounter with Eileen Drewery; trust me, you won't be disappointed.
As a footballer, I loved him just as much as I love the man. He had a work-ethic that so often made him an integral cog of the Arsenal midfield. Whether he was deployed on the right-side of midfield or in the centre of the park, Parlour's energy and industry complemented the continental culture shift that the club were going through in the early years of Arsene Wenger's reign.
Ever the joker off the field, Parlour was a consummate pro, and rarely went missing in the biggest games. During lock-down, Sky Sports have been showing repeats of old matches; a 3-2 win at Highbury against United to announce the Gunners as challengers in 1997; a 1-0 win at Old Trafford to clinch the 2001/2002 title; wrapping the title up at White Hart Lane in 2004. In all three, Parlour was arguably man of the match.
He was a fantastic footballer, and a real embodiment of what it means to be Arsenal. Since retirement, he has spent his time working as a pundit, representing Arsenal as an ambassador, and most recently giving shout-outs for Birthdays and Stag-dos alike by live streaming himself completing 'Cobra Bombs'. A modern-day hero, there can be no doubt!
Ray, never change! And please don't stop telling stories!