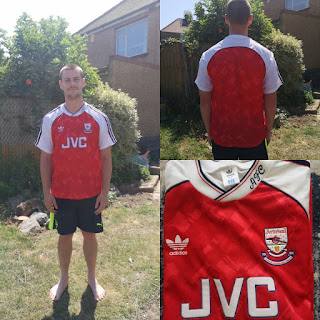 See, I told you all that I wear these shorts every day! The fluorescent yellow doesn't quite compliment this shirt in the same way as yesterdays effort. Still, a fetching ensemble, I'm sure you'll agree.
In my opinion, every single home shirt should carry the class that this one does. Simple, classic but absolutely timeless. The detail I love most about this though, is the 'League Champions 1990/91' banner below the club crest. When I was attempting to source this shirt, I had made the decision fairly early in my quest that I wanted one with this detail.
That leads to the only natural starting point for this shirt, and that is the 1990/1991 title winning team. It is a triumph that is often overlooked by all but the most devout Arsenal supporter, largely due to the manner in which the title in 1989 had been won two years before. On that night, Arsenal clinched the title on goal difference; in 1991 they romped to the Championship, losing just one game in the process.
Arsenal finished the season seven points ahead of second-placed Liverpool, despite having two points deducted for the original Battle of Old Trafford. For supporters outside of N5, that sensational 22-man brawl is the abiding memory of that season. For Arsenal fans, the memory will be of the nearly Invincibles.
The Gunners were far and away the best team in the country, which could and maybe should have teed up a spell of domestic domination. They finished the season having conceded just 18 league goals, 22 less than runners-up, Liverpool. Whilst the core of the side from 89 remained, it was supplemented by the continental flair of Anders Limpar, who contributed 11 goals in the league.
The campaign is made all the more impressive by the fact that Arsenal had to make-do without their inspirational captain, Tony Adams, for two months, after he was jailed following a drink-driving incident. Both this and the points deduction against Manchester United could easily have derailed the season, but the spirit and never-say-die attitude instilled by Graham ensured that Arsenal ended the season as Champions.
Arsene Wenger is often cited as the greatest manager in the clubs history. Even as a supporter who has only really know the Frenchman, George Graham has to be spoken about with equal praise. Two league titles; two league cups; an FA Cup; and the European Cup Winners' Cup, it really is an illustrious list of honours.
He may have fleetingly gone to the dark side, but he has to be remembered as a true Arsenal great. The Scot certainly did write an incredible chapter in English football history.