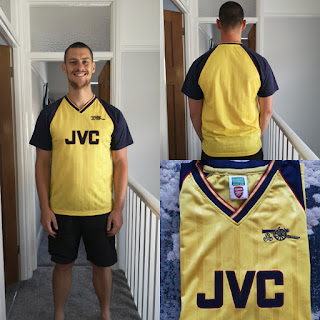 I deliberated for quite a while as to whether I would include this shirt in my collection, seeing as it is not an authentic original. Score Draw are a really cool company that create replica shirts in partnership with football clubs, so they are still official shirts.
Although Arsenal are a massive global brand these days, I still enjoy buying official products as it makes me feel as if I am in some way contributing to the club (apparently the amount I spend on tickets each season does not satisfy this desire).
In previous posts, I have emphasised how important I believe it is to understand the history of your football club. That is what this shirt represents to me. Perhaps the most significant moment in the clubs history came at Anfield in 1989, when a stoppage time goal from Michael Thomas clinched the First Division title. The famous words "it's up for grabs now" will forever be ingrained in the memories of not just Arsenal fans, but football fans in general. It is a piece of commentary that has become synonymous with English football, and perhaps only surpassed by the narration of the final moments of the 1966 World Cup final.
I was not born until a few months after this iconic moment, but that has not stopped me from learning everything about the occasion. The moment has been romanticised incredibly in the film Fever Pitch, while the more recent docufilm, 89, regales the story by those that were there. My Dad has also told me the story of his experience of this game time and time again. Living in my first childhood home, my Mum and Dad had a friend from America staying, a guest whose name escapes both of them!
Like the rest of the football community, my Dad had resigned himself to the fact that Arsenal were going to narrowly miss out on the title. Against the odds, Alan Smith nodded Arsenal into the lead and there was genuine belief that the Gunners could yet pip Liverpool to the title. But as the seconds tick away, so does the hope.
The final moments of iconic commentary by the late Brian Moore will forever be etched into my sub-conscious. Thomas charging through the midfield setting up the anxiety and tension perfectly, before finishing the job with it's up for grabs now! As the ball hits the back of the net, my Dad's beer hits the ceiling of our lounge, ensuring a league title and a weekend of painting simultaneously.
This moment has often been compared to Manchester City's more recent title win, where two goals in stoppage time against QPR secured their first Premier League title, at the expense of Manchester United. But does two late goals against a relegation-threatened side really compare to taking the title away from the current league Champions against all the odds? I really don't think so.
No one outside of Highbury believed, and even the players and staff must have given up hope as the game went past the 90 minute mark. But to use the words of former Arsenal chairman Peter Hill-Wood, it was never in doubt!