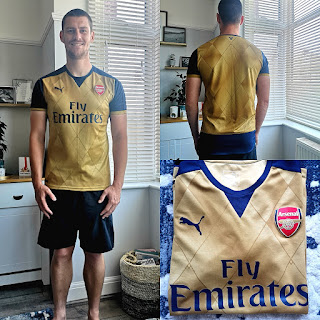 Football has always been my way of documenting my life. Any event, no matter how exciting or mundane, is invariably linked to moments within the football calendar. It is a tool that has allowed me to form an almost photographic memory that is unparalleled to anyone else I know. Sometimes, I wonder what my brain and mind could achieve if my focus was aligned to a cause more worthy than Arsenal Football Club!
In 2015, my life had changed fairly significantly. I was in my second year of living in London and had just changed jobs, and perhaps more significantly, had re-located to North London for my new role. Of course, we all know the real reason for this move was to be closer to The Emirates! 2015 was also my first year as an official season ticket holder.
Throughout the season, I attended a lot of games, both home and away. It felt like there was a real possibility of Arsenal winning the title and as each game ticked past, the itch to attend the next grew and grew. A 3-0 win away to Swansea felt like a turning point for the Gunners, with myself and my two friends, Andrei and Robbie, all agreeing that this was the type of fixture that we would have lost the previous year. How naïve were we!? And how many times have I and many others arrived at the same point!? Far too many. Nevertheless, at the time we felt there was a real opportunity for Arsenal to win the Premier League again. Joel Campbell undoubtedly became the focus of that trip after the Costa Rican scored his first goal for the club. We had spent the entire drive down to South Wales joking about Campbell being our saviour, and when he notched Arsenal's third, pandemonium occurred in the away end - or at least the three seats occupied by me and my friends.
"JOEL, JOEL, JOEL HE'S MAGIC! YOU KNOOOOOOOOOW, HE'S GONNA SCORE US A GOOOOAAAAL!"
Despite our best efforts, we failed to make the chant a staple of the Arsenal songbook. One day...… one day.
Ironically, my clearest memory of this shirt is actually from a game that I didn't even attend; Leicester City away. Months before, I had made the decision to apply for tickets for the Rugby World Cup, and had been successful in my application. This felt like a sporting occasion that I needed to be a part of and I was able to get tickets for Canada vs Italy at Elland Road, the same day as Arsenal's trip to the King Power Stadium. My then girlfriend told me I had to go to the rugby as it had been planned for ages. I went; I hated it; I regretted the whole thing.
Arsenal went onto win the game 5-2, with a hattrick from Alexis Sanchez sandwiched between goals from Theo Walcott and Olivier Giroud. As for the rugby, I have no idea what the result was. I spent the entire game checking my phone and being berated by Andrei for not being with him in Leicester. When the text came through to tell me that Sanchez had put Arsenal 2-1 up, I jumped from my seat and shouted "GET IN". I looked around Elland Road and saw confused faces looking up at me; nothing had happened in the game that I was actually at.
So there we have it, Joel Campbell and a horrific life choice. Football throws up the strangest memories.