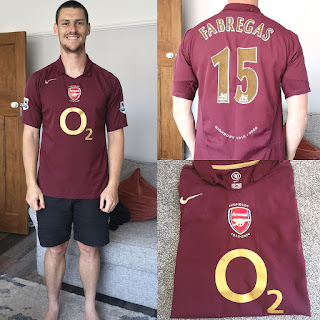 Sadness. That is the single word that comes to mind whenever I see this shirt. Sadness at what we left behind; sadness at the direction that the club has taken since 2006; sadness knowing that I will never get another second sat in that beautiful stadium.
I am desperately lucky that as a supporter, I had the privilege of visiting Highbury more than 60 times. During the final season at the great stadium, my Dad took me to the majority of games, and I savoured every second of it. There are so many memories that spring to mind when reminiscing about that season. The sensational run to the Champions League final; the Highbury squirrel; Dennis Bergkamp scoring a typical Dennis Bergkamp goal on the day that the game had been dedicated to him; Pascal Cygan and Sol Campbell braces against Fulham and Everton respectively; 18-year-old Cesc Fabregas; Lasagne-gate; the list truly does go on and on. But there are two moments that deserve to stand above the rest. One is of course the final game at Highbury. The other? The final North London Derby.
When anyone thinks back to that campaign, it is impossible not to see Thierry Henry, on his knees and kissing the Highbury turf after completing his hattrick against Wigan Athletic. But, his equaliser against Tottenham is just as iconic. Arsenal had struggled throughout the game and when Robbie Keane put the visitors in front (let's not get into the whole way that they scored their goal when Arsenal had two players down injured and Martin Jol could be heard bellowing "PLAY" from the touchline).
Arsenal looked bereft of ideas. I was sat in the North Bank lower and the crowd were equally frustrated at the lack of attacking threat that The Gunners were offering. Enter Thierry. As he is ushered back to the bench by Pat Rice, he pulls his warm-up bib off and throws it behind him. Queue the roar of 35,000 Gooners. Now there is belief; the battle has only just begun!
All of a sudden there is a determination within the ground; a determination to not let that lot be the last team to win at Highbury; a determination to save the world from the inevitable DVD release of their famous win; and a determination to revive the slim hopes of Champions League qualification via the league. 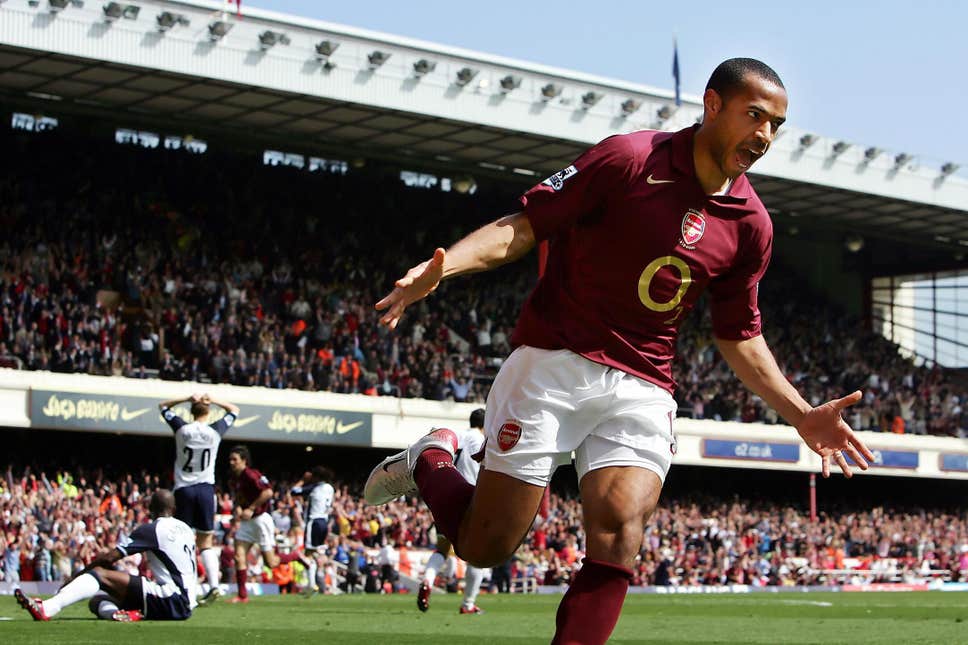 And then it happened. Emmanuel Adebayor battles with Paul Stalteri on the left-hand side of the pitch and drifts in-field. A bobbled pass is played into the path of Henry who controls the ball with his right foot, before prodding the ball into the far corner with the outside of the same boot, all in one sensational movement. Ledley King can't get close. Paul Robinson dives in vain. Highbury erupts.
Thierry was often criticised for not showing enough emotion when he scored. Not this day. He sprints back towards the half-way line, while roaring at the visitors section. 1-1.
Although Arsenal didn't manage to find a winner, the draw allowed Arsenal to mount pressure on Spurs in the pursuit of the top four, and on the last day, they usurped their North London neighbours to qualify for Europe's elite competition for another year.
I miss Highbury. Every time I visit the Emirates, I am reminded of how the experience will never bet the same again. But thank goodness they did not beat us that day. Thank goodness for Thierry Henry.