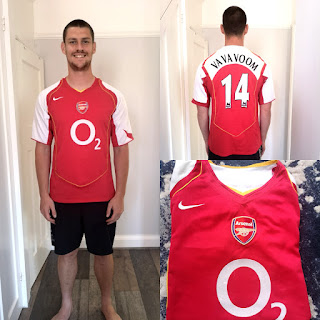 "Patrick Vieira, to win the FA Cup for Arsenal...… And he has! Arsenal have won the FA Cup again, and Manchester United are left empty handed."
Those beautiful words still come back to me with remarkable frequency. This was a significant moment in my development as an Arsenal fan. Not only was this the first cup final that I had attended, but it represented revenge. I had seen Arsenal play Manchester United on two previous occasions; a 1-0 defeat in the semi-final of the FA Cup in 2004 at Villa Park; and more recently a 4-2 home defeat at Highbury. The former was an easier pill to swallow, with Arsenal being crowned Champions and The Invincibles just a few weeks later. But the latter still hurt.
The Arsenal/Man Utd rivalry was an intense part of the late nineties and early noughties, and it is a rivalry that I don't think has and possibly will ever be matched. A few months ago I wondered if my memories of the brutality of these fixtures had been magnified in my mind, so I trawled through old fixtures on YouTube to form a more up-to-date opinion. Turns out, my childhood memories were spot on.
The hatred was real; the desire to win unparalleled; Wenger vs Ferguson; and of course Patrick Vieira vs Roy Keane, perhaps the most prevalent and iconic player rivalry that the Premier League has ever witnessed. In the two league encounters during the 04/05 campaign, Manchester United had claimed bragging rights, but both games are remembered for more than just the result; the battle of the buffet at Old Trafford, and the infamous Highbury tunnel fracas. Add to this the small matter of United ending Arsenal's 49-game unbeaten run, it is no wonder that the hate ran so deep within both clubs.
Fast-forward to the Cup Final. When my Dad told me that he had got us both a ticket, I remember feeling joy that I had never experienced before. After a few minutes, an ominous and anxious thought became lodged in my brain.... What if we didn't win!? I am on the autistic spectrum and as a child, I was pretty poor at dealing with negatives in a rational way. For the week leading up to the final, I had played out every scenario that could possibly happen. Or so I thought!
It just so happens that the only eventuality that I didn't cover was the one that actually occurred on that day in Cardiff! Isn't football fantastic!? My Dad and I made our way down to the Millenium Stadium with our friend Eric, a man who sadly is no longer with us but became an honorary grandparent to me throughout our shared Arsenal experiences.

It had become apparent in the days leading up to the game that Thierry Henry would not be fit to play in the final, a situation that certainly gave United the edge. Arsenal were comprehensively battered from the first minute to the last. Jens Lehmann made a succession of crucial stops while Freddie Ljungberg deflected a Ruud van Nistelrooy header onto the crossbar. The Gunners did not test Roy Carroll in the United goal until deep into extra-time, when Robin van Persie struck a sweet free-kick that was beaten away. Jose Antonio Reyes was sent off before the game eventually went to penalties.
My Dad turned to me and said "Prepare yourself, we might not win", before putting his arm round me. I dread to think how at that point of my life I would have reacted had Arsenal not won that shoot-out. Arsenal produced five incredible spot-kicks, and with his final kick in an Arsenal shirt, Vieira, undeservedly, clinched Arsenal's tenth FA Cup success. At least Dick Turpin wore a mask! As soon as the players had lifted the cup, my Mum text both me and my Dad to say that she had a tear in her eye, as she knew how much it meant to us. Another action that highlights the impact that Arsenal Football Club have had on my family.
As we exited the Millenium Stadium through the stairwell, my Dad bellowed "VIEIRA, WOAH, VIEIRA, WOAH!" The whole stairwell joined in. The echo was unlike anything I had ever heard. Back at the car park and no one was going anywhere anytime soon. Car horns sounded and people screamed out of their windows with joy.
Once we had begun our journey home, it quickly became apparent that Eric did not fancy driving the whole way home, so we stopped at a travel lodge for the night. As soon as we stopped, my Dad identified a major problem; there was no services on our side of the dual carriageway! He left me with Eric and came back ten minutes later with a bag of goodies; crisps, chocolate and Coca-Cola for me, beers for him and Eric. When we asked where he had got these from, he calmly told us that he hopped over the central reservation of the dual carriageway to go to the open services on the other side. We had to have some kind of celebration!
The next day we made our way back to Margate, and as soon as we got home, we went straight to a newsagent to buy the papers in order to continue basking in the glory that we had witnessed the previous day.
An incredible day, an incredible win with incredible people. I love you Dad. Rest in peace, Eric.