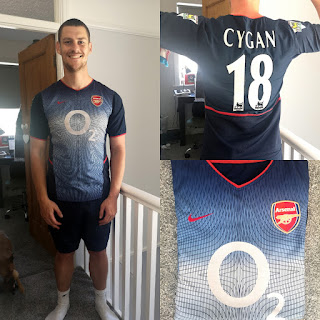 Well, I guess the first thing to do is to address the massive elephant in the room. I know what you are all thinking:
"Tom, what on earth possessed to you get a shirt with Pascal Cygan on the back?"
The answer to that question is an explanation that I'm sure many budding football fans can relate to. I was desperate to appear ahead of the curve; to be able to identify talent long before any of my peers. This opinion was based on one performance; PSV Eindhoven away. This is a game that is not only remembered for a dominant 4-0 for The Gunners, but also for the opening goal scored by Gilberto Silva after just 21 seconds; a Champions League record at the time.
But none of you are interested in that. You all want to know how that fixture resulted in the purchase of not only a Pascal Cygan shirt, but numbered shorts and socks to complete the full-kit wanker ensemble. Martin Keown started the game, but had to be replaced after just nine minutes. Enter Pascal.
Retrospectively, he probably didn't even play that well. But to my 12-year-old eyes, I was convinced that I had witnessed the second coming of Tony Adams. This was a classic case of a football fan seeing a new, shiny player and being convinced that this was the greatest signing in the history of football. 18 years later, I admit that this opinion might not have been correct.
Cygan had an error in him, there is no doubt about that. He is often remembered for his lack of pace, which was highlighted when he was deployed as an emergency left-back in the 2005/2006 campaign away at Wigan Athletic. However, I think he often received an unfairly harsh reputation. He came to Arsenal and was our fourth choice centre-back for large parts of his career. He had Sol Campbell, Martin Keown and Kolo Toure all ahead of him in the pecking order. Any player coming in would struggle to usurp any of those. Nevertheless, I probably could have chosen a better player to wear on my back.
The 2002/2003 season will always be one that I look back on with anguish. Arsenal played some sensational football across the season and most neutral fans accepted that they were the best team in the country and should have won the title. But a late season collapse meant that Arsenal had to be content with just the FA Cup. This was of course the season when Arsene Wenger first intimated that he believed his side could complete an entire league campaign without losing a game. He was mocked extensively following a defeat at Everton, and many believed he would never live the comment down. Little did we know what was to come.
My main memories of that season are dominated by Thierry Henry. Across the season, Henry scored 24 league goals but perhaps more impressively, also set the Premier League assist record with 20. And not only was he relentlessly effective, he played with a swagger that has and always be a rarity in football. His blistering strike against West Ham became arguably the greatest goal that was seen in this shirt.
Thierry also produced his magic on the Champions League stage, and all Arsenal fans will associate this kit with his hattrick away to Roma. Arsenal actually wore their home shorts and socks with this away shirt in order to not clash with Roma's kit. Over the years, it has not been uncommon for Arsenal to wear some interesting kit combinations in Europe.
Sylvain Wiltord also deserves an honourable mention for this kit. Arsenal travelled to Old Trafford in the FA Cup fifth round and the Frenchman grabbed the second goal to clinch victory. This, at the height of the rivalry between the two clubs, was a particularly sweet moment.
So there you have it, a somewhat strange personal experience but a memory that I hold fondly. One of the rules that I have implemented into this project is that I have to wear the chosen shirt while I am writing about it. So yes, I am sat in my lounge in my Pascal Cygan shirt!
Thank you, Pascal.